Something I've been meaning to try for some time. Somewhat arbitrarily I decided to go analog, the victims were a 741 op amp and a 555 timer. The torture:

The victim (I snapped the pins off since they are easy to remove and had more of an impact of nitric reactions): 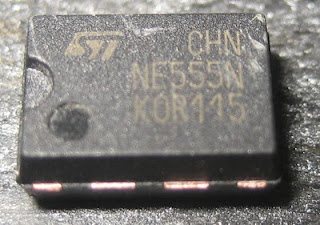 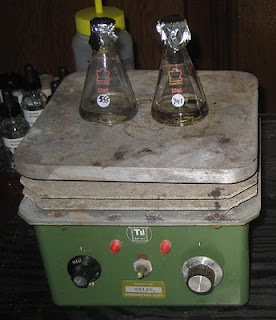 I didn't take a picture of this, but the solution started to turn brown and diffuse out around the IC before too long. Began to turn darker: 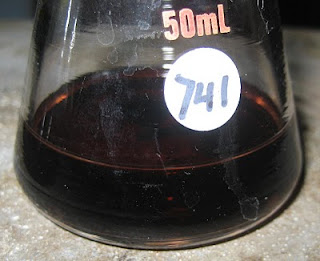 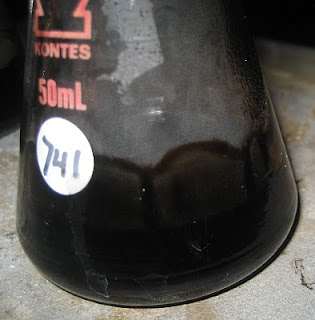 The acid behaved differently in the 555 flask (misty, no creeping along sides in 555 vs creeping and no mist): 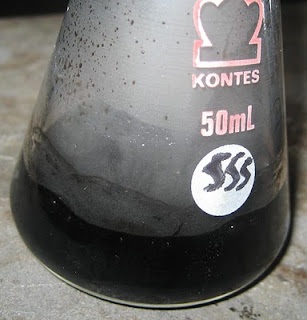 After draining and some initial acetone rinse: 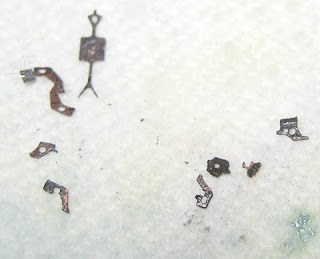 The die is seen in the leftmost object. I've been told that sulphuric is useful for live decapsulation and it certainly shows here. Much of the "wiring" was preserved despite prolonged exposure to acid. Nitric on the other hand would have obliterated these. Not as visible, but also all of the bond wires were preserved.
Since they were both analog ICs made by ST, it less likely that they were different epoxies. Both used fresh acid. Probably due to some contamination in the flasks.
I'll try to update with some IC pictures. Nitric tends to leave a lot of residue. This on the other hand had overall clean dies, although one of them had sort of a grainy appearance, maybe from certain residues? Apparently the 555 didn't have a passivation layer and the 741 did which resulted in scratches on the 555 after I was careless during plucking and didn't realize it wasn't protected.

In summary, this is what I thought
Advantages
-Less fumes than nitric acid, MIGHT be safer with less equipment / ventilation. With the cover on my glassware and the top being somewhat cold from the environmental temperature, it seemed to reflux the acid and I didn't even really notice the fumes. Contrast with nitric where fumes are an inherent problem from the nitrate decomposition.
-Inexpensive
-Readily availible materials? Battery acid and drain cleaner are readily availible. Battery acid tends to be purer and would likely need to be distilled first, but drain cleaner (ex: Bull Dozer) is much stronger but with contaminants. In any case, generally not a controlled substance and one should be able to order it without too much trouble.
Disadvantages
-Higher working temperature. Might literally take your hand fall off if you spilled on it. When I was younger a single drop of cold concentrated sulphuric landed on my hand and caused a severe burn to which I'm reminded to this day by a scar. I can't imagine what a broken boiling beaker could do.
-From the solution turning black and the lack of bubbles, no clear indication of when its "done." Combined with the larger cool down time of the acid and glassware, this can make it inefficient for doing small batches.
Overall, probably a good compromise for those that want to try some of this stuff
-Grainy appearance on dies? Need to look more into what that came from

With this in mind, one good application might be to use it as a wash after nitric. Since I've found issues with particulate residues after nitric, a brief sulphuric bath might be able to clear them off. I think sulphuric works at lower (ie room) temperatures, albeit much slower, so it might not even require heating. I'll probably try to soak a fully encapsulated IC overnight and see how it goes as a starter.
Posted by John McMaster at 9:46 AM