About 5 years ago when I was in college at RPI I used a half ton capacitor bank to blow up apples and other meals.  I'm not in this particular video (stupid test) but this gives you an idea:https://www.youtube.com/watch?v=2EhuHs7IdM0

It was a lot of fun and I've wanted to do something like it again for a while.  I have a large number of ~400V rated pulse capacitors: 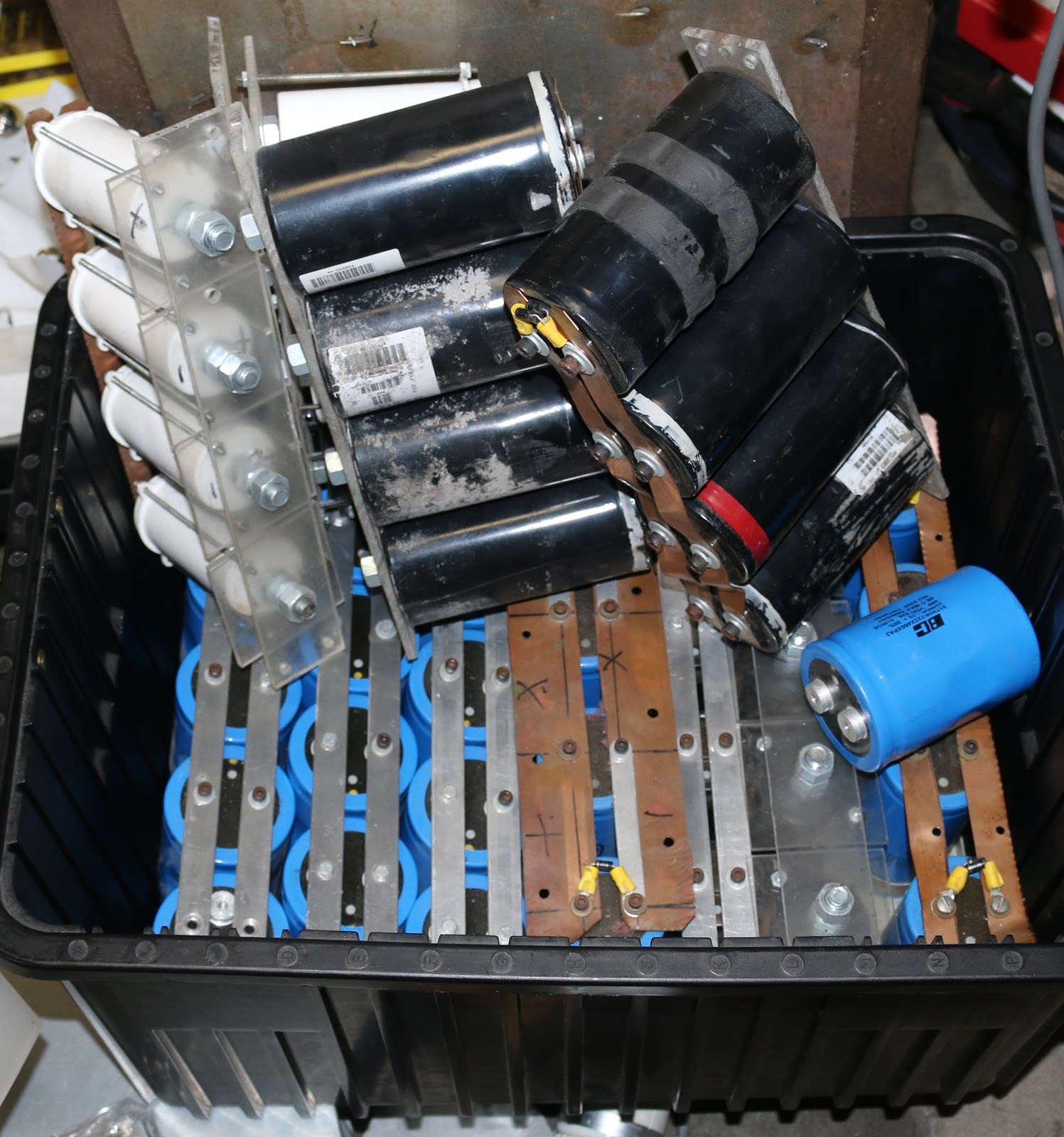 that I've used before to blow up wire, small railguns, etc with good success.  However, I also have an 80 kV death capacitor that I've always wanted to use:

The death part is pretty literal:

"WARNING: THE ENERGY STORED IN THIS CAPACITOR IS LETHAL".  Not "may be"...*IS*.  And they are probably right: don't touch it while its live.

But the capacitor is pretty boring without a way to power it.  4 years or so ago I used a 5kV capillary electrophoresis power supply to give it a token charge:

This made a reasonably large snap but, because capacitor energy is 0.5 C V^2 was only 0.4 % of the max energy.  After that it was put into storage and didn't see any use for some time due to lack of a large power supply.  I bought some capacitors and diodes to make a CW multiplier for my neon sign transformer but never built it.

Roll forward to present day.  This capacitor came out of an x-ray (diffraction or crystallography IIRC) system at RPI.  Somewhat related, I've been doing some x-ray work and had a unit fail (more on that in another post).  I opened it up and found I was able to salvage the high voltage (100kV) transformer: 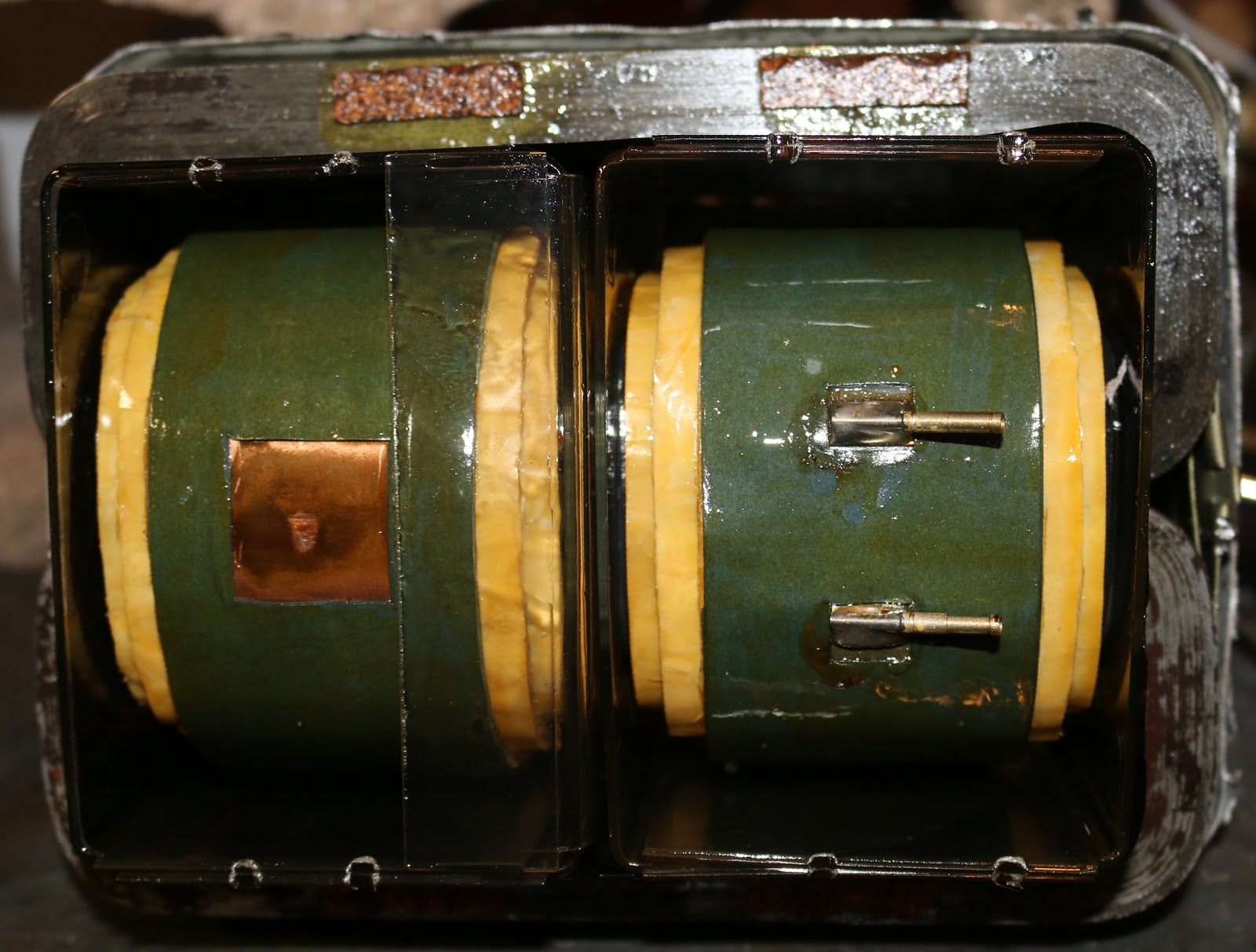 For the following I'm currently only using the left half which seems to give about 60kV DC max.   Worth mentioning I could have grabbed the transformer but it was very heavy/large and left behind. 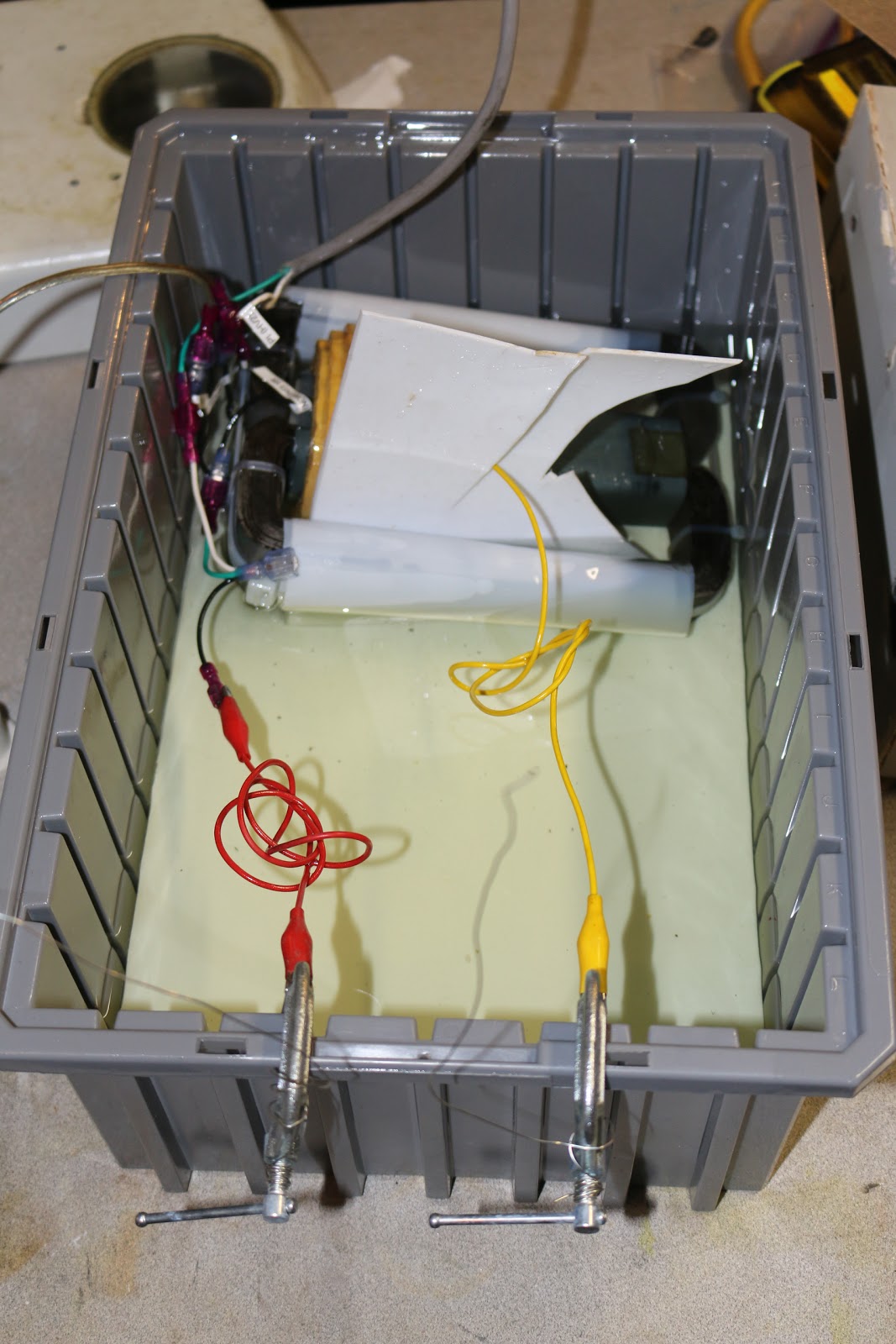 About a gallon of oil in there and the box was tipped to one side that it fully covered.  Then I made some arcs: 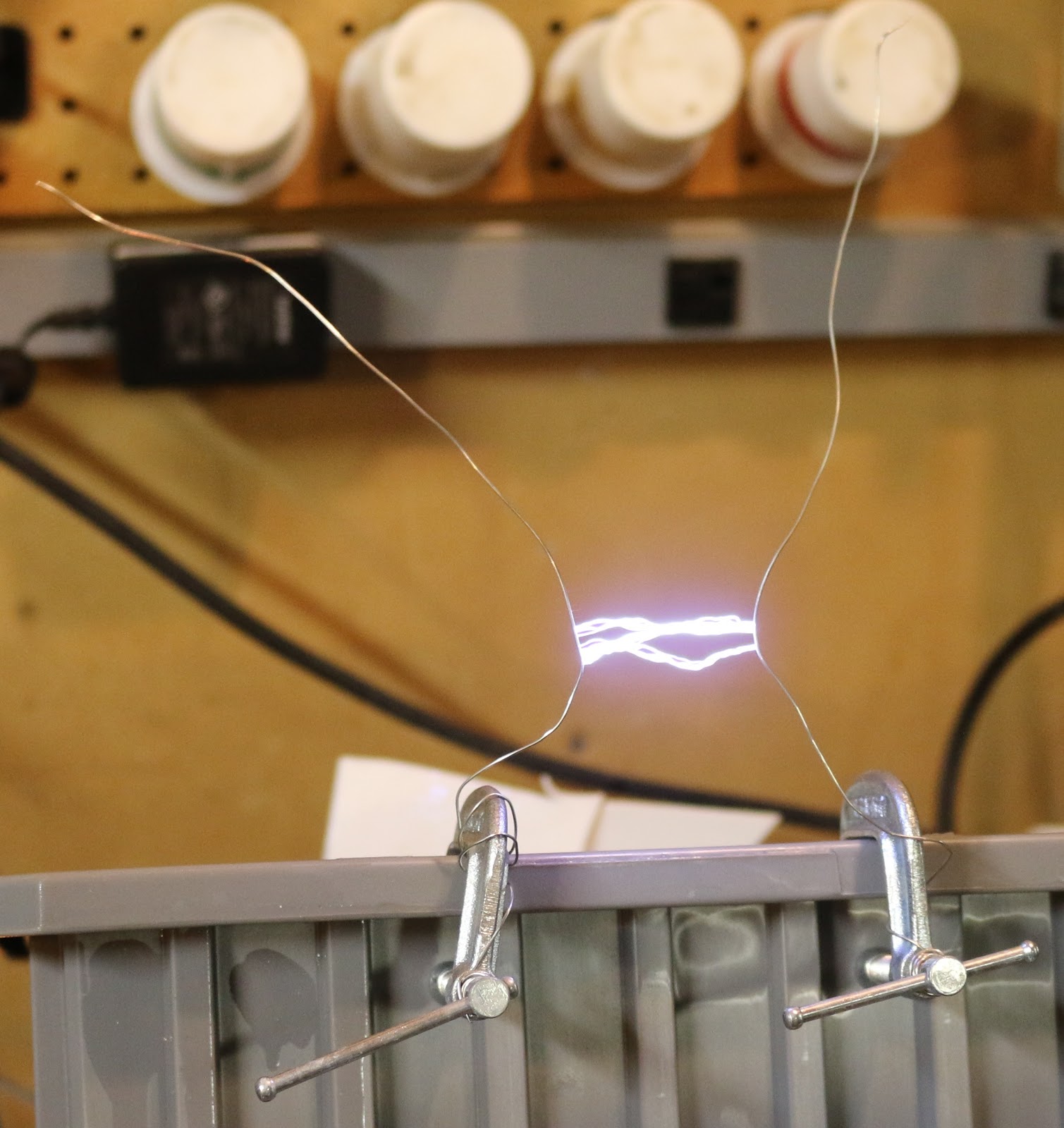 The gap in the above picture is about 2"

But this is AC and to fully charge the capacitor I need DC.  I still had the original full wave rectifier that powered the capacitor but, for reasons I don't recall, I only have the bare diodes and not a rectifier assembly.  So next step was to assemble them into a rectifier module.  Originally I did a classic rectifier square design: 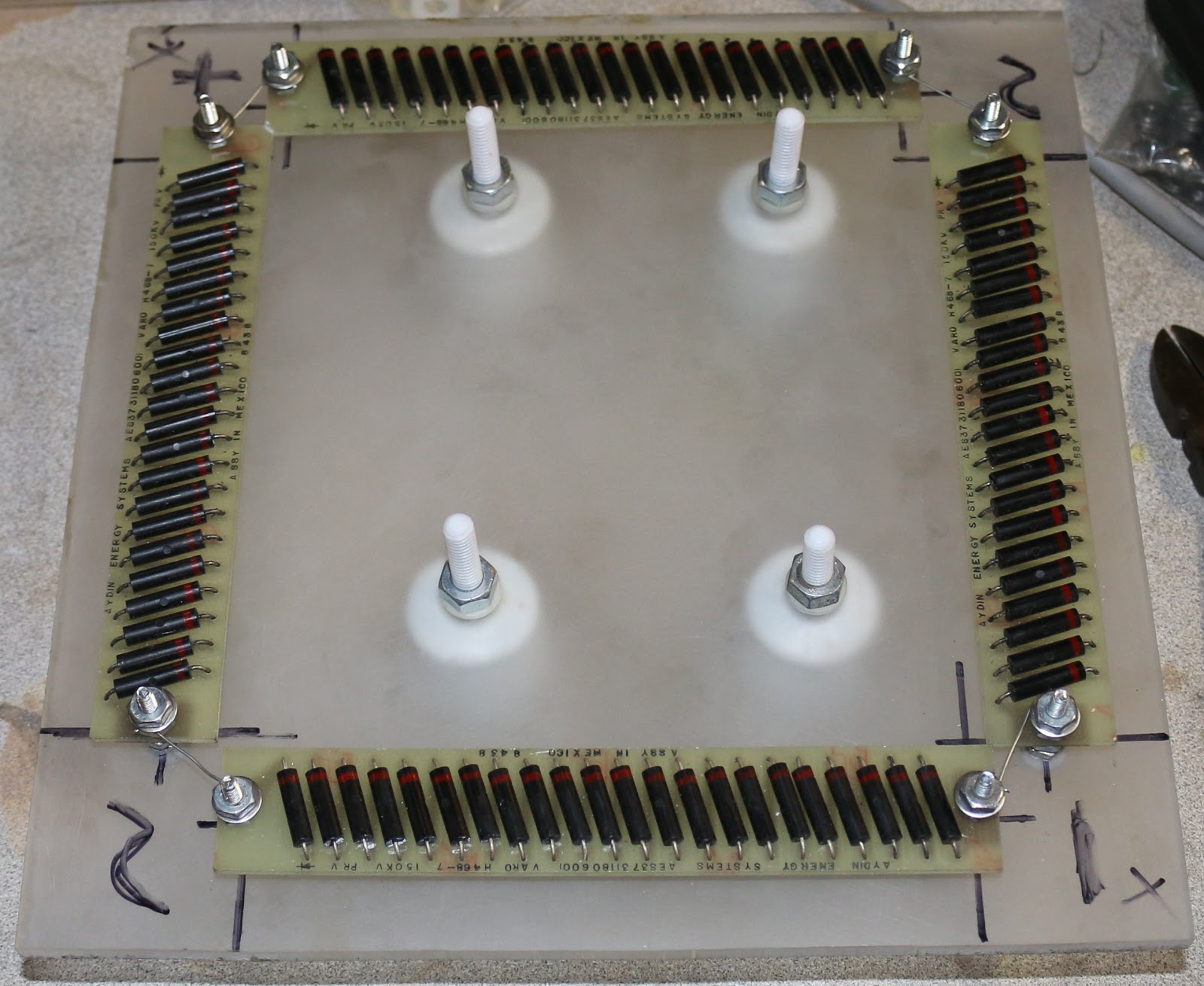 But then realized this required crossing an output high voltage line over an input source, potentially leading to a breakdown.  So redesigned int in an x pattern so that the polycarbonate sheet provided insulation between the two halves: 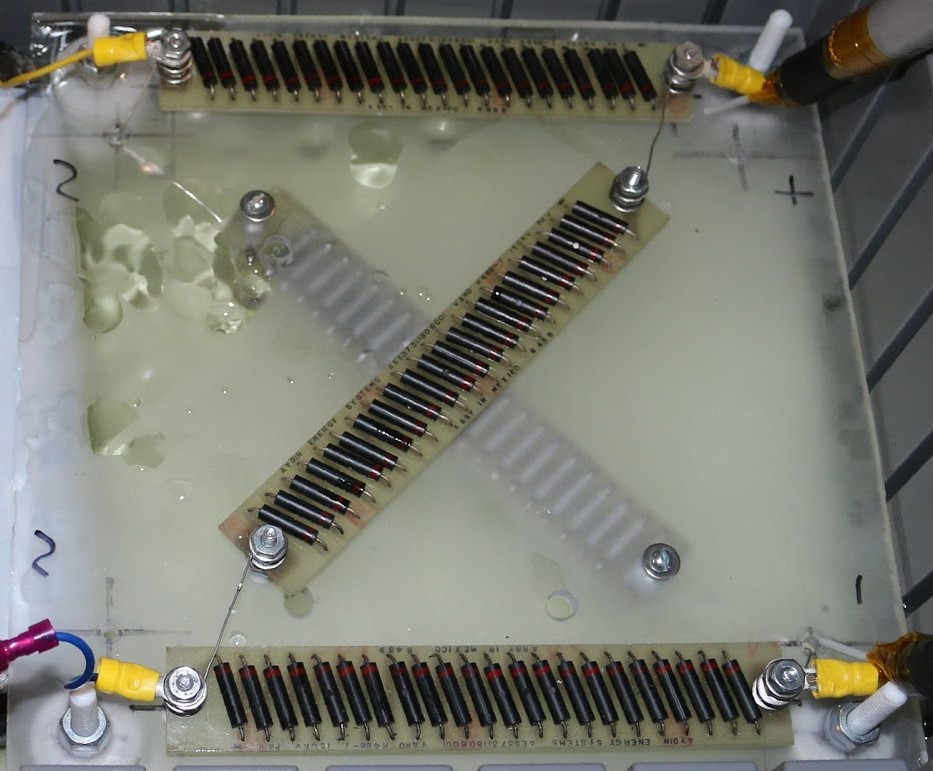 Per the labels, AC comes in on the left and DC exits on the right.

Next, we need a trigger.  In the simplest tests its fine to set a spark gap and let it automatically trigger but longer term   In the past I used a pneumatic switch to trigger a spark gap which worked pretty well.  I had some 2" stroke solenoids which aren't ideal (remember I said I could jump 2" above?) but was good for a first test.  Setup: 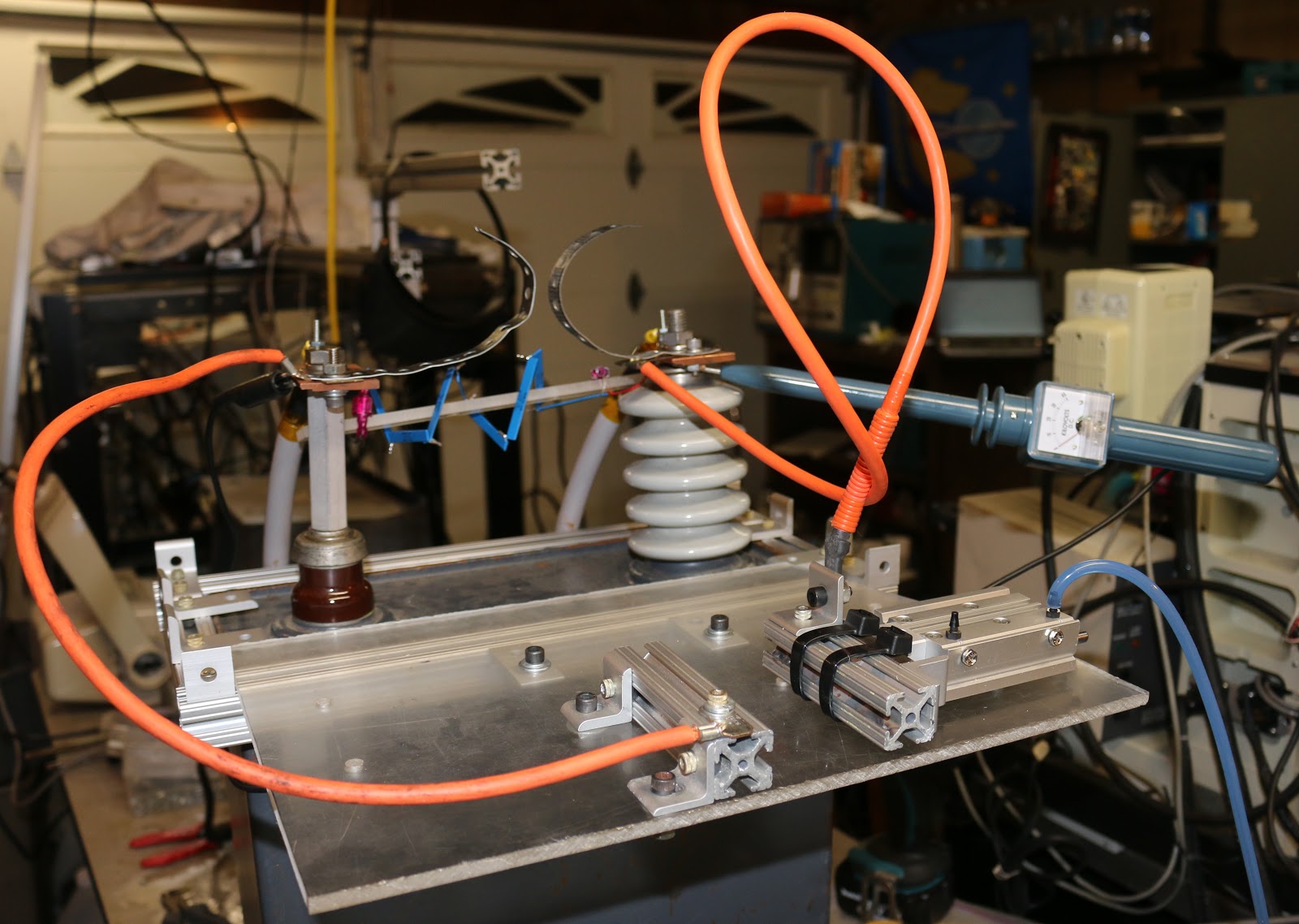 Note on the right you can see 40kV probe for "low voltage" tests.  The blue silicone tube goes to a compressor on the right.  I simply open up the regulator to close the switch.  I also built a polycarbonate platform that you can see in the above picture.

This system needs a way to safely discharge.  Long term I want an emergency stop, but short term I'm fine with simply bleeding off charge.  My goal is to have the system safely discharged (50V) within about 10 seconds.  I think this didn't work out in the end, but in theory this should be V = e^(-t /(RC)) where:
Solving for R gives you about  5.4M.  That was my original goal, for reasons I don't recall I instead did 800M (too high current draw?).  This discharges to 50V instead in about 185 seconds which still isn't too bad.

Putting it all together, this is what the prototype schematic looked like:

Some artistic license on the schematic: I loosely interchanged electrical paths with pneumatic paths.

Time for results.  The first victim was a galaxy 2 phone donated by a coworker.  Couple minute video of the test process here: https://www.youtube.com/watch?v=Q-sTKhyaM3Y

The phone wasn't blown in half but was a good start: the screen was cracked and burned.  Ultimately the phone succumbed though so I call it a success.

But the goal was to blow up some fruit.  First I tried placing a tomato directly inside the gap: https://www.youtube.com/watch?v=CgCAwcUGMeg&list=UUq3z1paLNFugoH3yTYokMIg

But this didn't work so well: a tomato has a lot of water that serves to nicely absorb the energy.  Next idea: put the electrodes inside the tomato and separate by 0.25".  This focuses the energy into a small space and forms a proper explosion.

Mission success!  There is one less tomato in the world.  I also decreased the camera ISO from auto to fixed 400 ISO to get better explosion coverage.  I also upped the frame rate from 30 fps to 60 fps to catch more gore.  I have a 1000 fps Casio that I'll try to use in the near future.

Finally, how to blow the phone in half?  I have a tenative agreement to upgrade the system from 800J to 12-13 kJ.  More to come 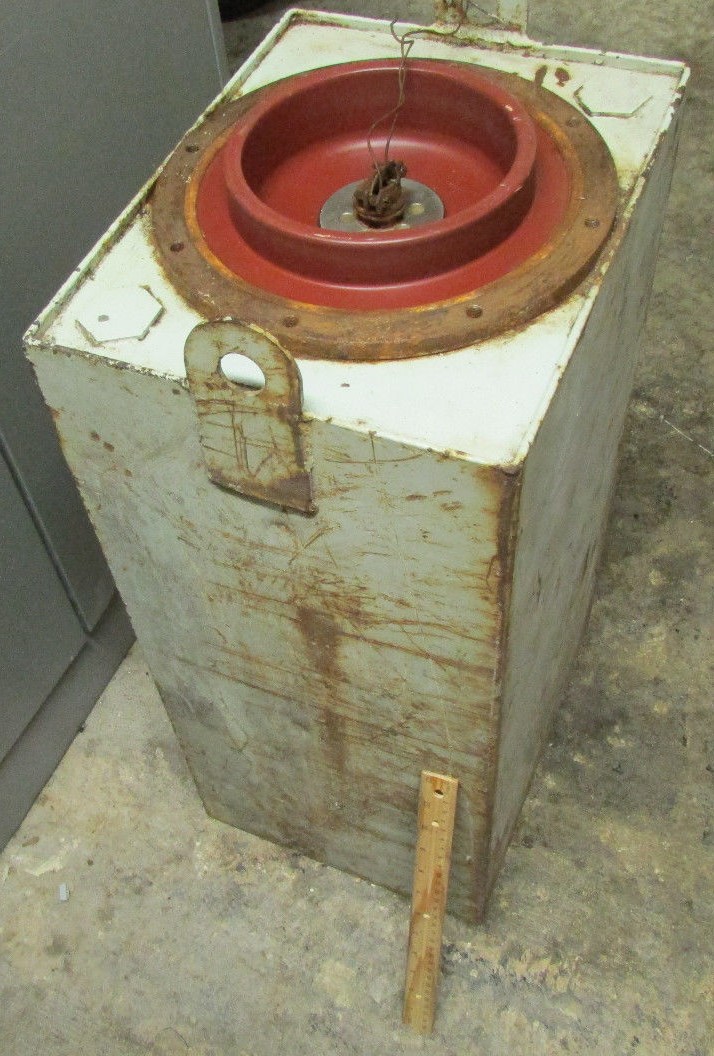 (note the ruler for scale)

Posted by John McMaster at 8:39 PM No comments: