I recently had to get through a number of samples which I wasn't that worried about damaging.  This gave me a chance to try something a little different.

H2SO4 has a few advantages over HNO3 for decapping.  First, I can't as easily get ahold of fuming HNO3 and HNO3 tends to cause a lot of corrosion.  However, H2SO4 works at much higher of a temperature so if nothing else takes longer to decap a sample from the time it takes to heat up the acid on a hot plate.

A heatgun on the other hand can rapidly heat something up by moving hot air over it.  I decided to try decapping a few chips by first cutting down down with a Dremel and then superheating them in test tubes.  You can see a video here:

Be sure to read the comments in the video description.  Basically took about a minute to heat up and then another two minutes to cook off the bulk epoxy.  Total decap time of maybe about 10 minutes a chip including Dremel time and cleaning.

However, this has numerous disadvantages.  First, a few of the dies got stuck in the test tube (presumably related to thermal expansion) and broke corners off when I managed to shake them out of place.  A lot of the dies also had rounded corners but I think that was more because I picked the dies up with my fingers (usually I use tweezers) which tends to break off the tips of the corners.

Dies also tended to come out pretty dirty.  HNO3 is more "water based" so tends to clean off easily.  H2SO4 is thick to begin with and dehydrates the epoxy into tar.  Even after ultrasound (acetone and water) I got some chips coming out looking like this: 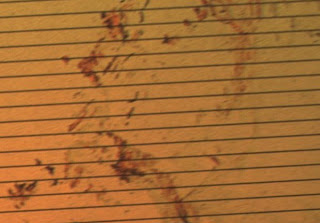 The bigger problem though is that some small bits of epoxy didn't dissolve off.  When dies come out of HNO3 or longer soaks in lower temperature H2SO4 they tend to be pretty clean.  However, I think that the epoxy mixtures had denser parts that didn't dissolve as well.  When the chips were run through ultrasound they developed areas like this: 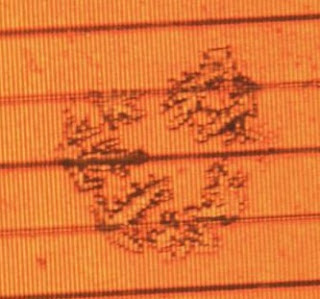 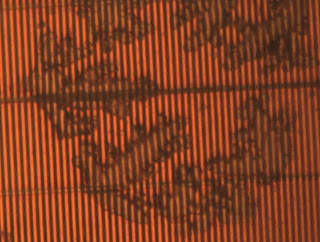 Notice how the metal isn't damaged, only the overglass.  This suggests that it happened after it was in the acid or otherwise the metal would have been corroded.  Additionally, the pattern suggests something pulled off.

Chips had corrosion at various points on the die, one of them was quite bad.  I suspect two leading causes.  First, although epoxy dissolves faster at the higher temperature I think that the metal was dissolving more faster than the epoxy.  Second, these were older dies with small holes in the overglass.  Newer dies tend to have higher quality passivisation that may have been less of a big deal as generally they would only eat around the bond pads and not seep in very far.

I didn't take the temperature but I imagine was in the 300+ C range since H2SO4 was boiling off.  I've decapped large BGA chips with 300C H2SO4 before (measured with thermometer) but generally stay away with it because the large amount of fumes and general safety hazard were it to somehow spill.  However,since the fumes could condense as they moved up the test tube (which was still relatively cool) not that much fumes really came out.  Also if the tube somehow broke the heatgun might disperse it everywhere.  I had a teflon sheet behind the tube as a backshield for general control in case that somehow happened.

I tried runs with varying levels of acid.  I leaned towards larger amounts than in the video that kept the solution very fluid at all times.  With the volume in the video the solution became thick enough that it bubbled up and had to be monitored closely so as to not overflow the test tube.

In summary, has the following advantages:
But some significant disadvantages as well:
I'm less likely to do this for older PDIP chips but QFNs or other modern chips that are thin, have higher quality overglass, and more even epoxy might work well.  However, I wouldn't advise this for valuable chips.