What weighs 865 lbs, is probably older than me, and has a radiation trefoil on it?  Its our friend the ISI Super IIIA, at last sitting in my garage: 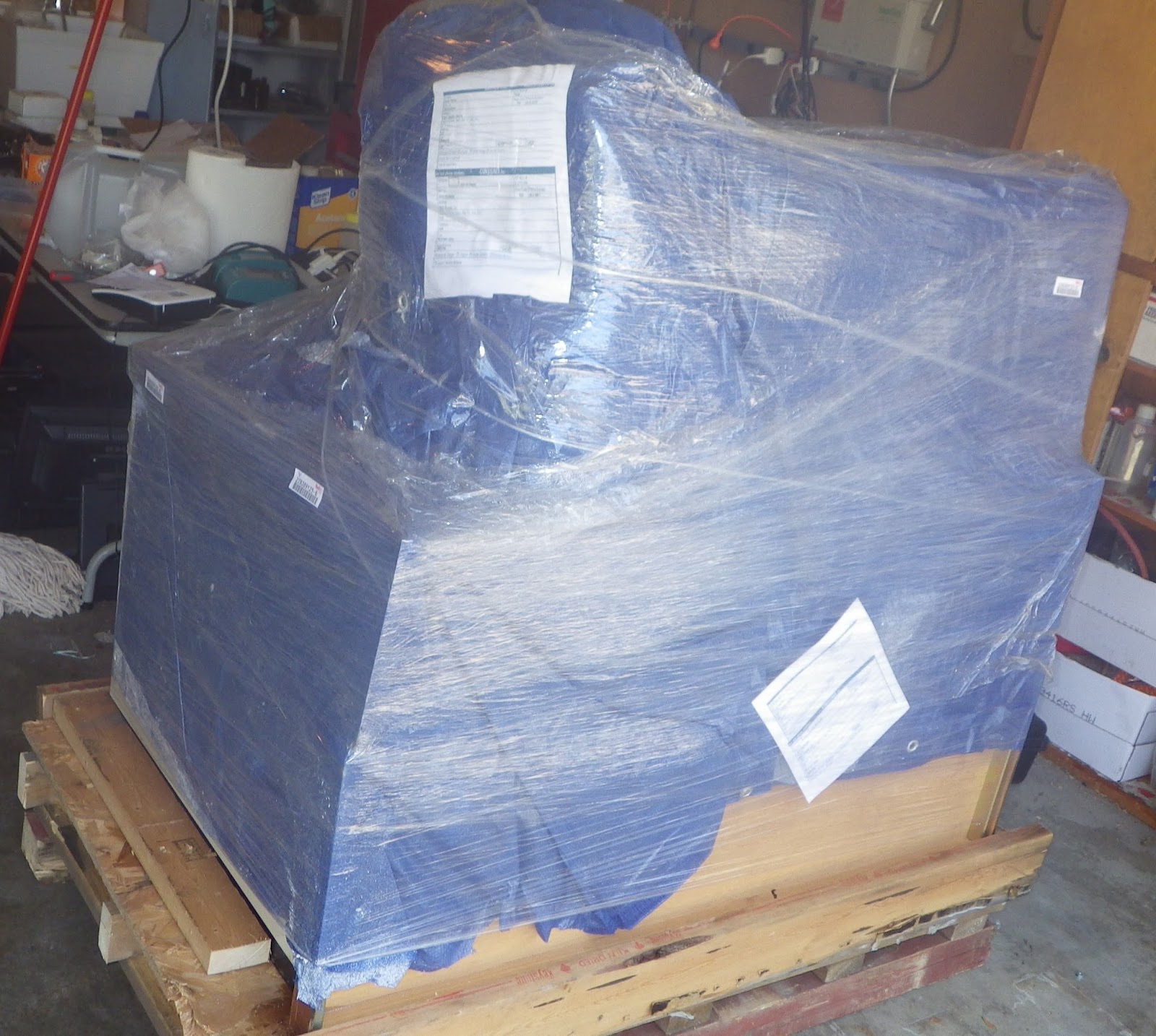 This post is about my initial impressions unpacking it.  In general, it is slightly larger than the noisebridge system (ISI TV Mini-SEM) and has several enhancements.

Here is the console: 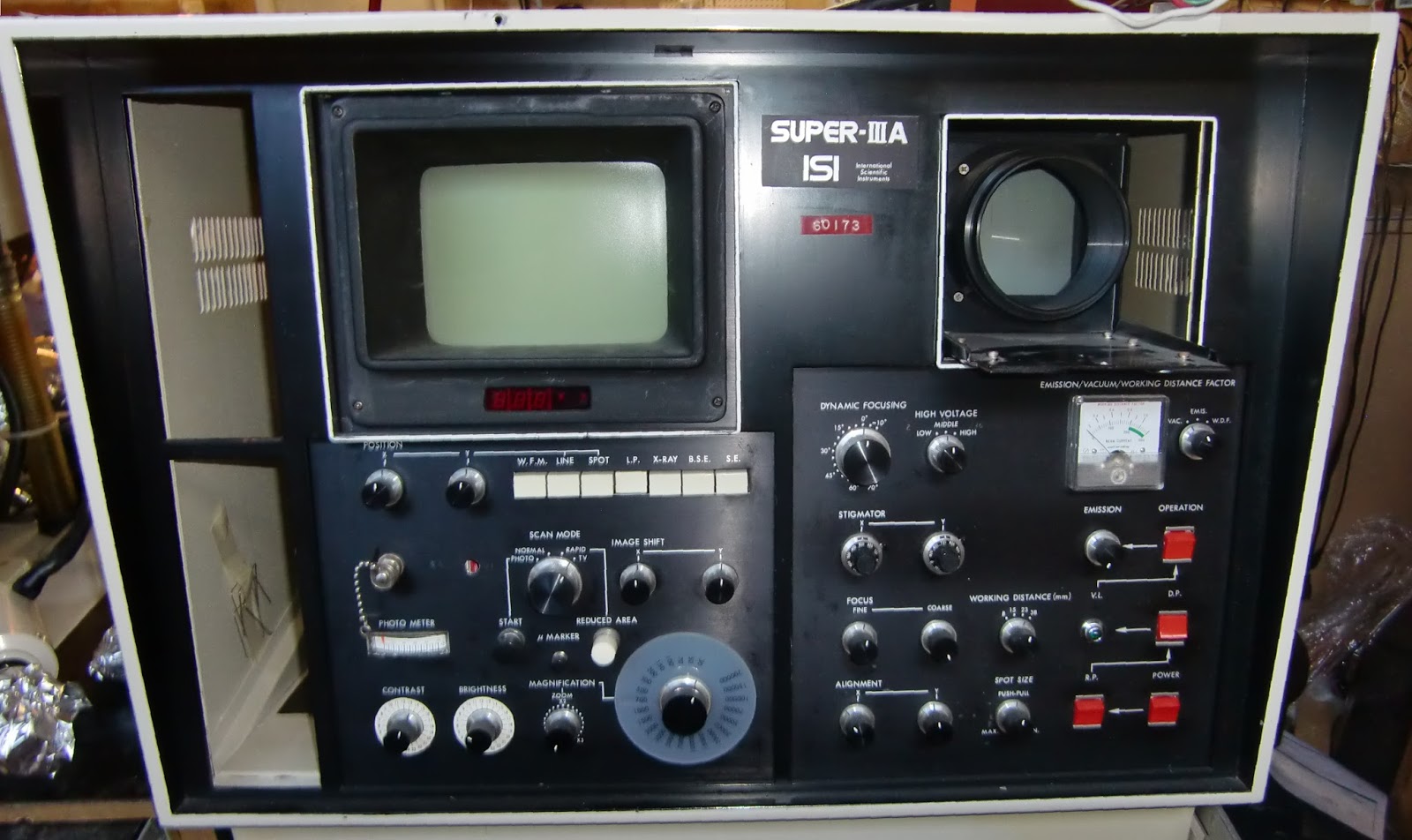 The left side mostly concerns with zoom and display.  The right side has some focus controls and pump control.  There are several empty bays on the far left presumably intended for expansion modules / customization.  It came with a cover plate that sort of fits there but with no real way to secure it down.  The upper left CRT is for normal viewing while the right is intended for photography.

It also has a cute little warning sign on top:

Physics is not my strong point but I think it goes something like this: the electron beam strikes the sample and excites the atoms it hits, ionizing some of them . Eventually they drop in energy and emit an x-ray, similar to how lasers work.  However, there is a fair amount of shielding and the column is probably only 10kV.

Moving on to the vacuum system, here is the inlet for the roughing pump: 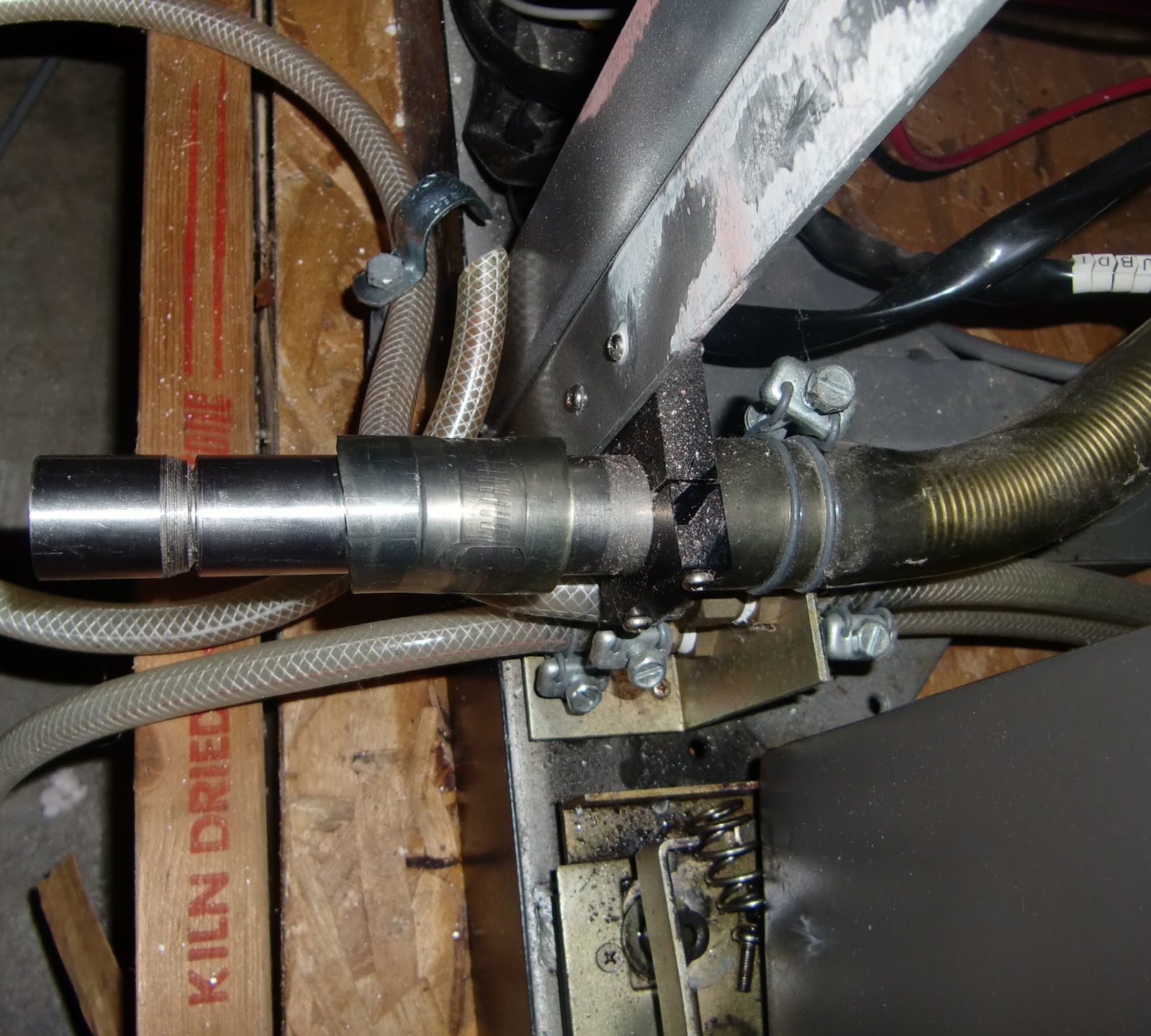 Above I'm checking connection with a 1" tube.  I plan on connecting a KF25 half nipple so that I can adapt it to my Varian DS-42 rotary vane pump.

This port connects to a vacuum distribution network that includes a diffusion pump: 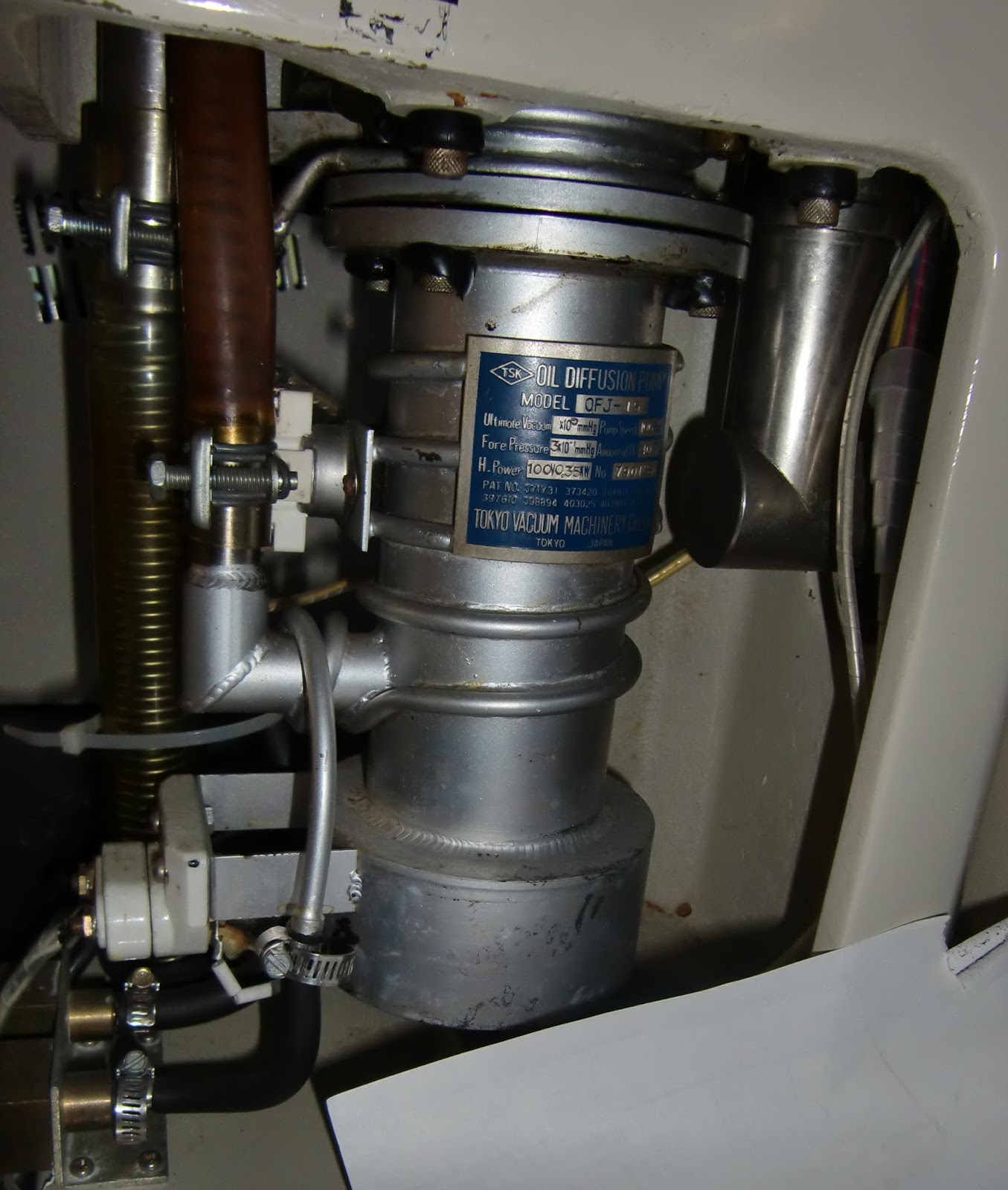 Presumably the pump has oil but haven't checked.

The diffusion pump external cooling lines had been pinched under the SEM during shipping.  I was able to use a car hydraulic lift to prop up one side of the SEM and un-pinch it.  I will need to add a circulating pump to cool it.  There is also an external filtering assembly that I may or may not use.  The noisebridge system by contrast had a smaller air cooled diffusion pump.

The roughing pump, diffusion pump, and chamber are tied together via an electronically controlled valve:

The buttons should allow the chamber to switching between roughing pump, diffusion pump, and vent.  The noisebridge system was manually controlled.

But what is the vacuum system without the electron beamline?  The beam originates here: 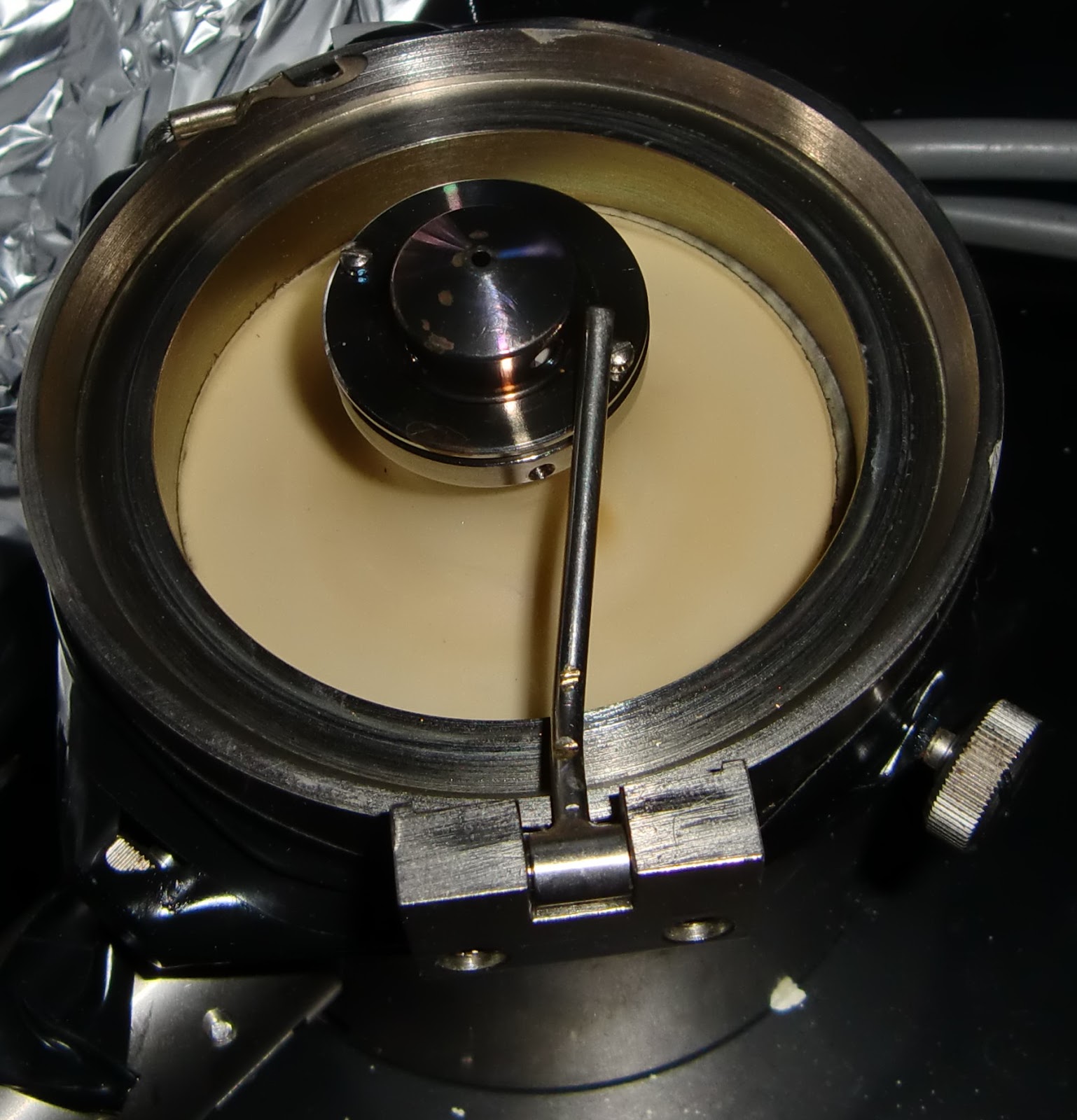 I haven't checked to see if the filament is intact.

And enters various electromagnetic optics that allow it to be properly magnified and focused here: 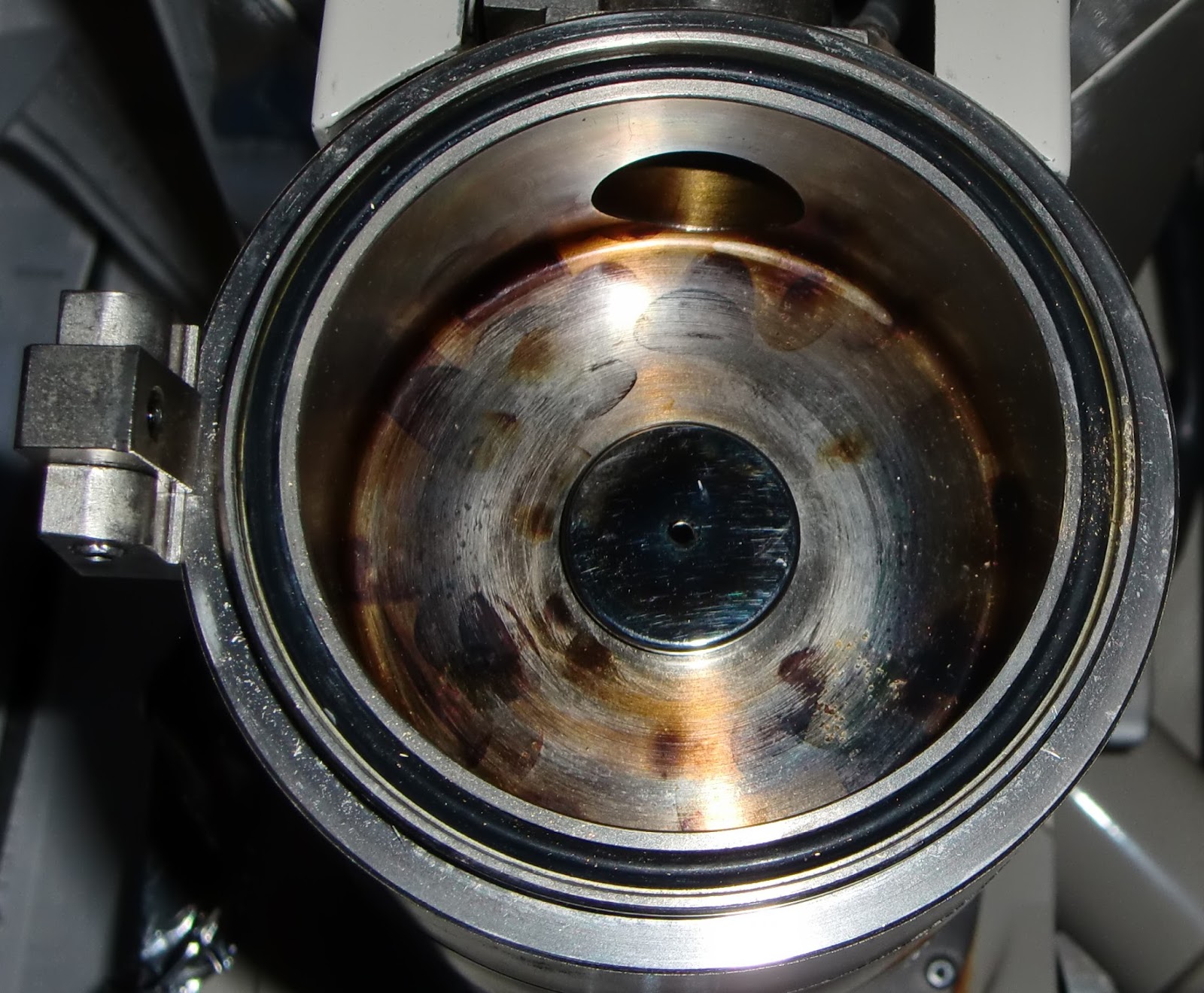 Both these pieces have unusually high wear.  lapointe2 had a note about filaments burning out.  Talked to a few people and the running theory is that it has a vacuum leak that is causing excessive filament wear, maybe same issue in both.  Hopefully I can grease up the system, monitor vacuum levels, and avoid such problems.

Eventually it snakes its way into the chamber. 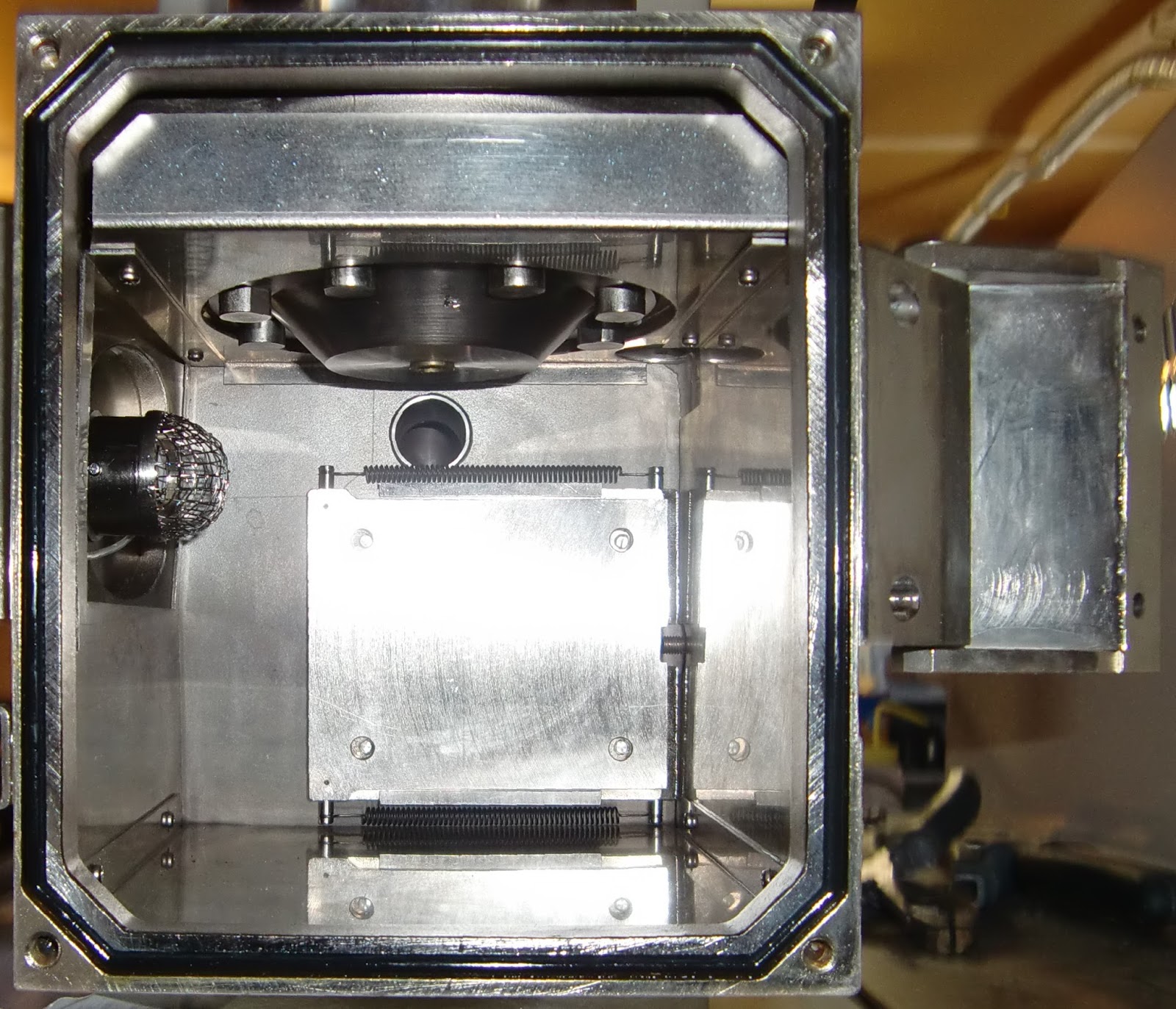 Hard to see in above picture, but there are three instrument ports with only one used.  Presumably this allows adding EDS or other accessories.  I plan to use one or two to install better pressure monitoring.  Close up of the interesting bits: 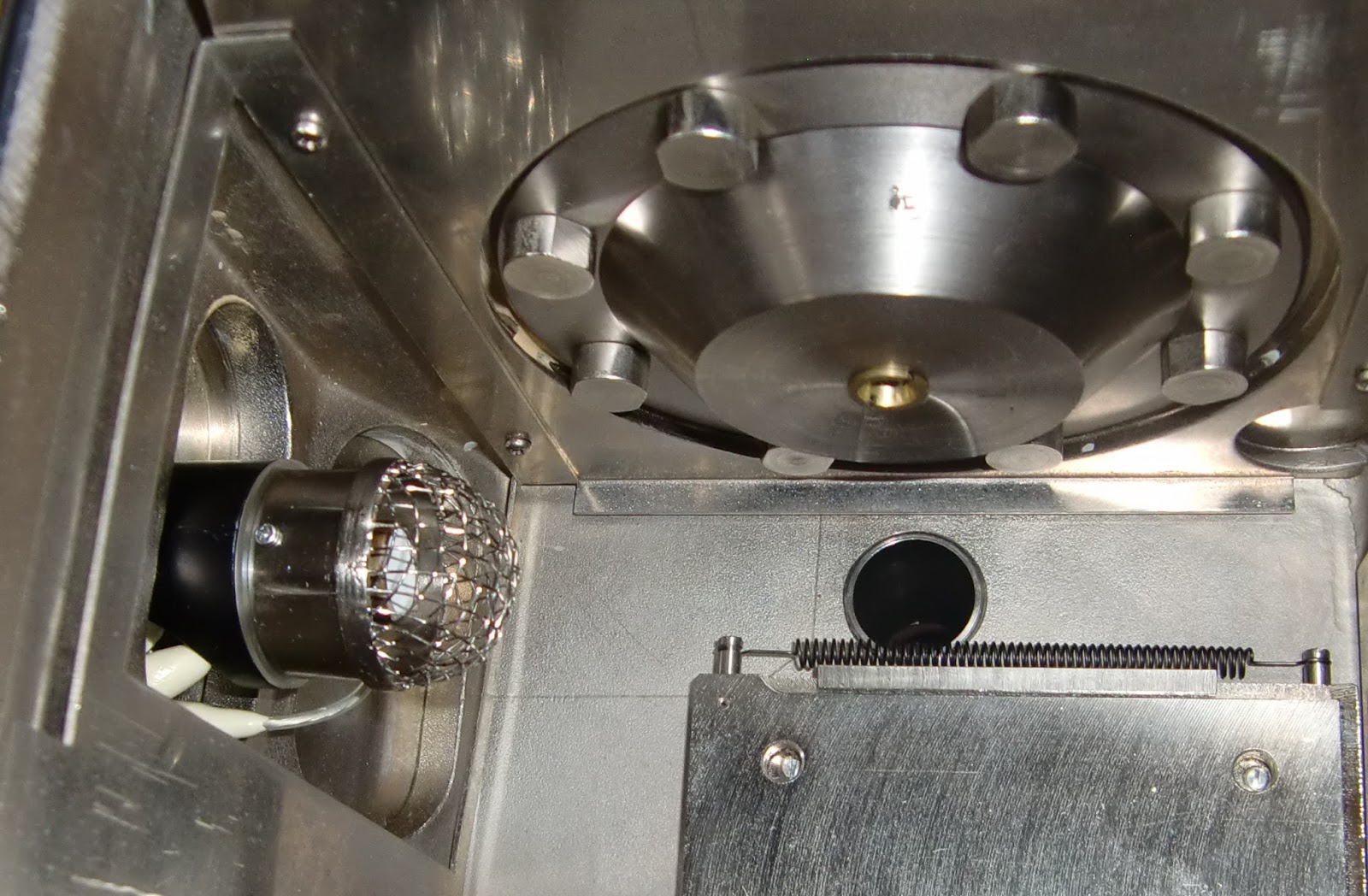 On top the beam exits from the beam steering optics to the stage below (not shown, more on it later).  To the left we can see the detector: 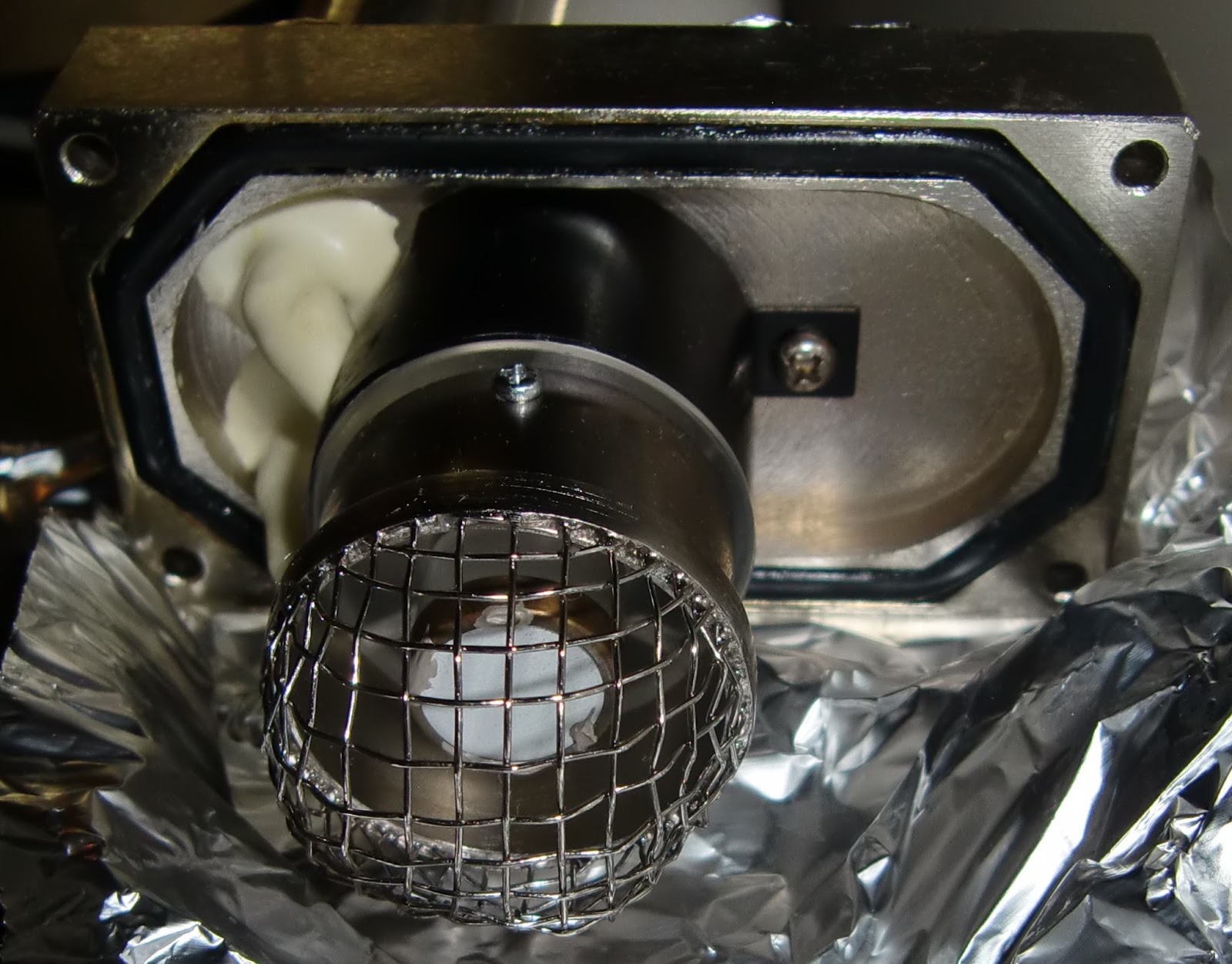 The grid is used to bias the sensor to help with sensitivity or something...read up on this before and need to refresh my memory.  Anyway, the white bit behind it should be the scintillator that emits a small bit of light when the sample emits an electron that strikes it.  This is then passed to the photomultiplier tube: 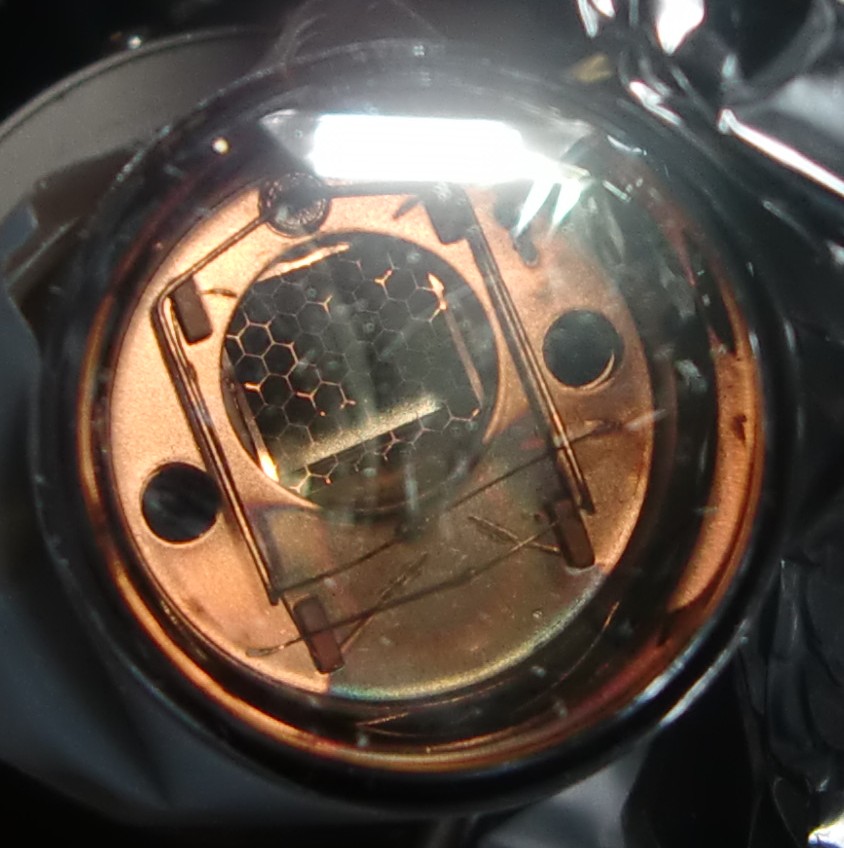 The signal then feeds into the various electrical boxes that convert it into vertical, horizontal, and intensity signals to feed the CRTs: 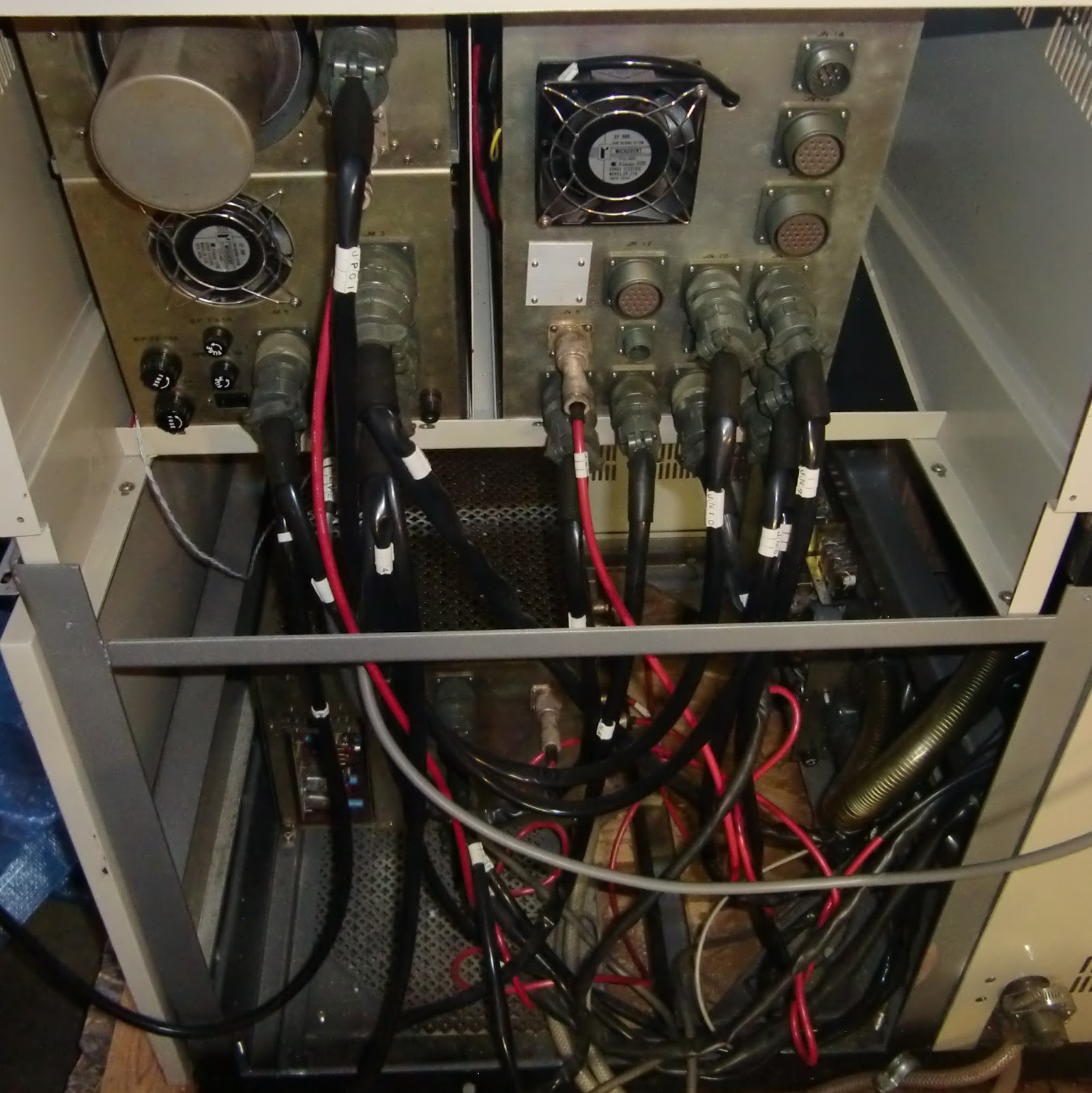 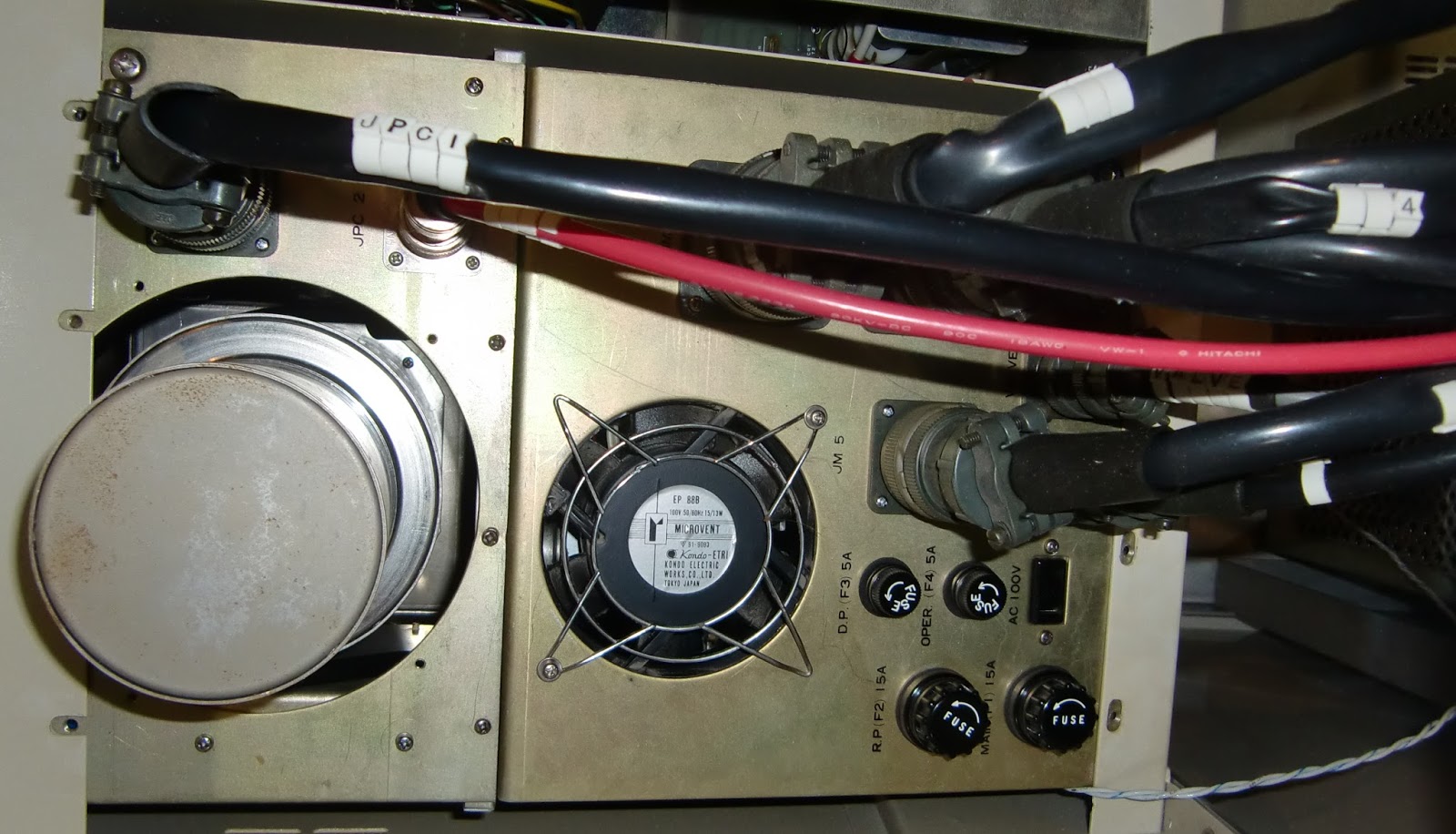 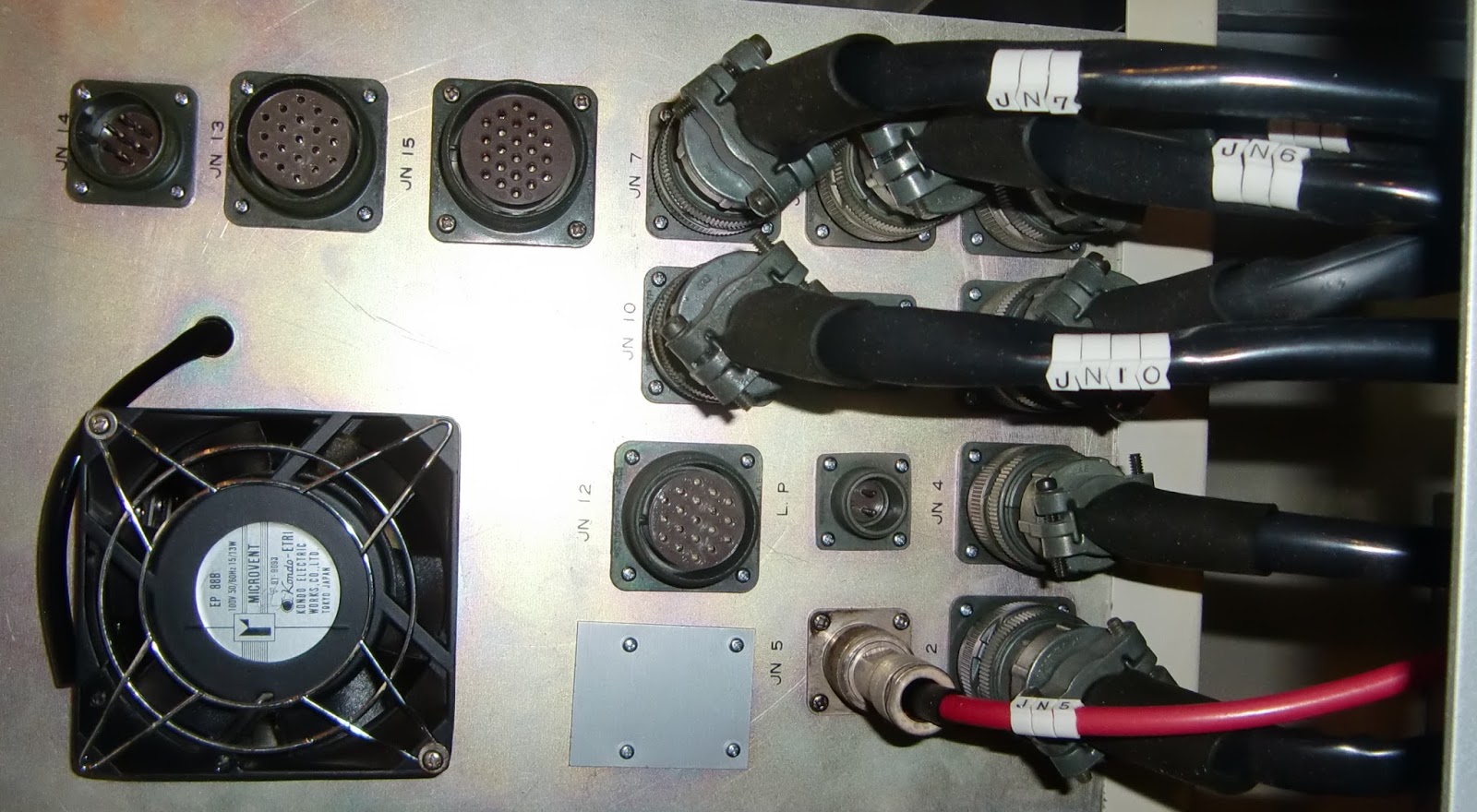 Going back to the chamber, here is the sample stage as seen from the outside: 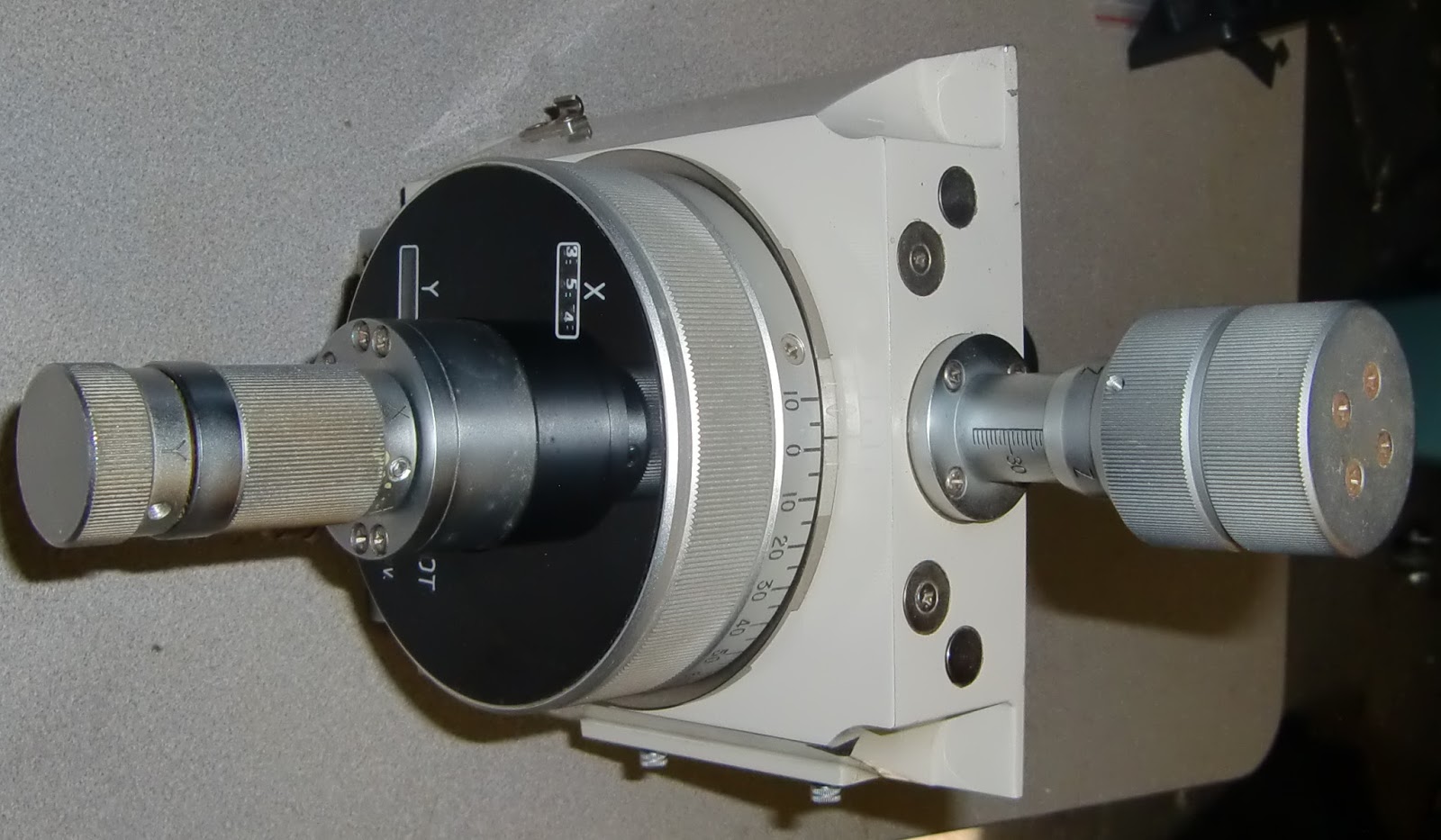 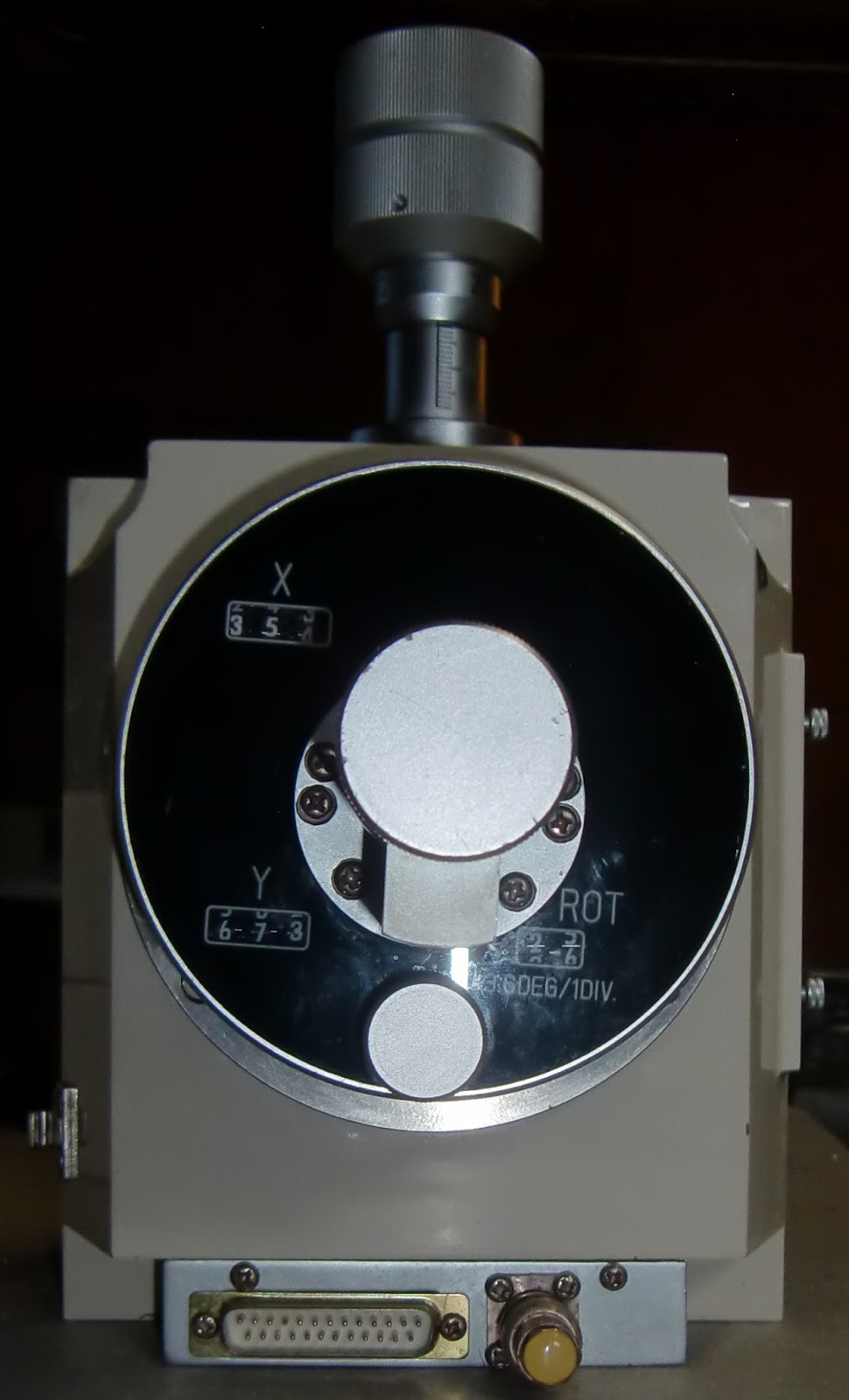 It has mechanical digital read out which is kind of cool.  Unfortunately, its also pretty coarse so I'm concerned it won't be easy to position things at high magnification. 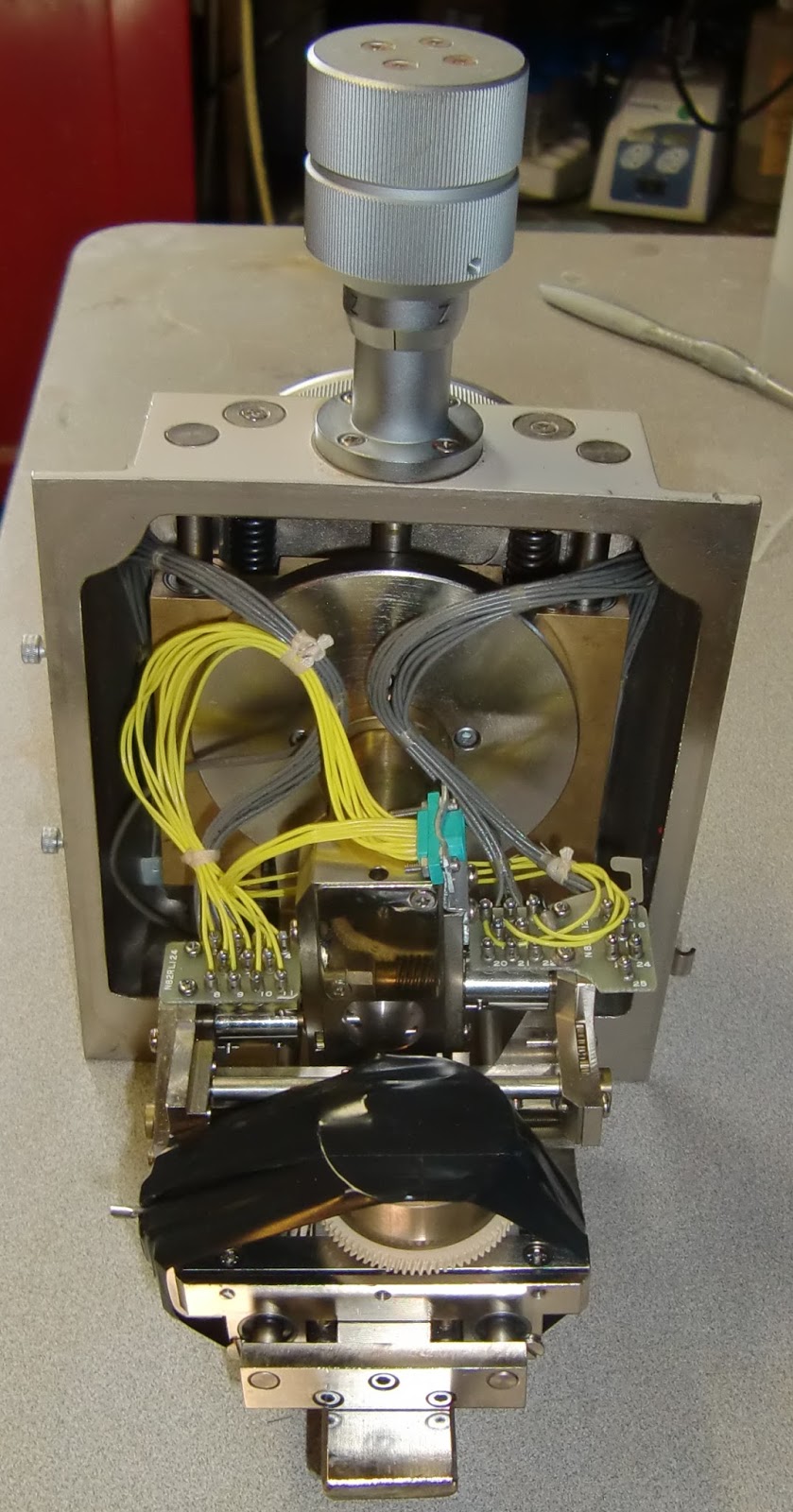 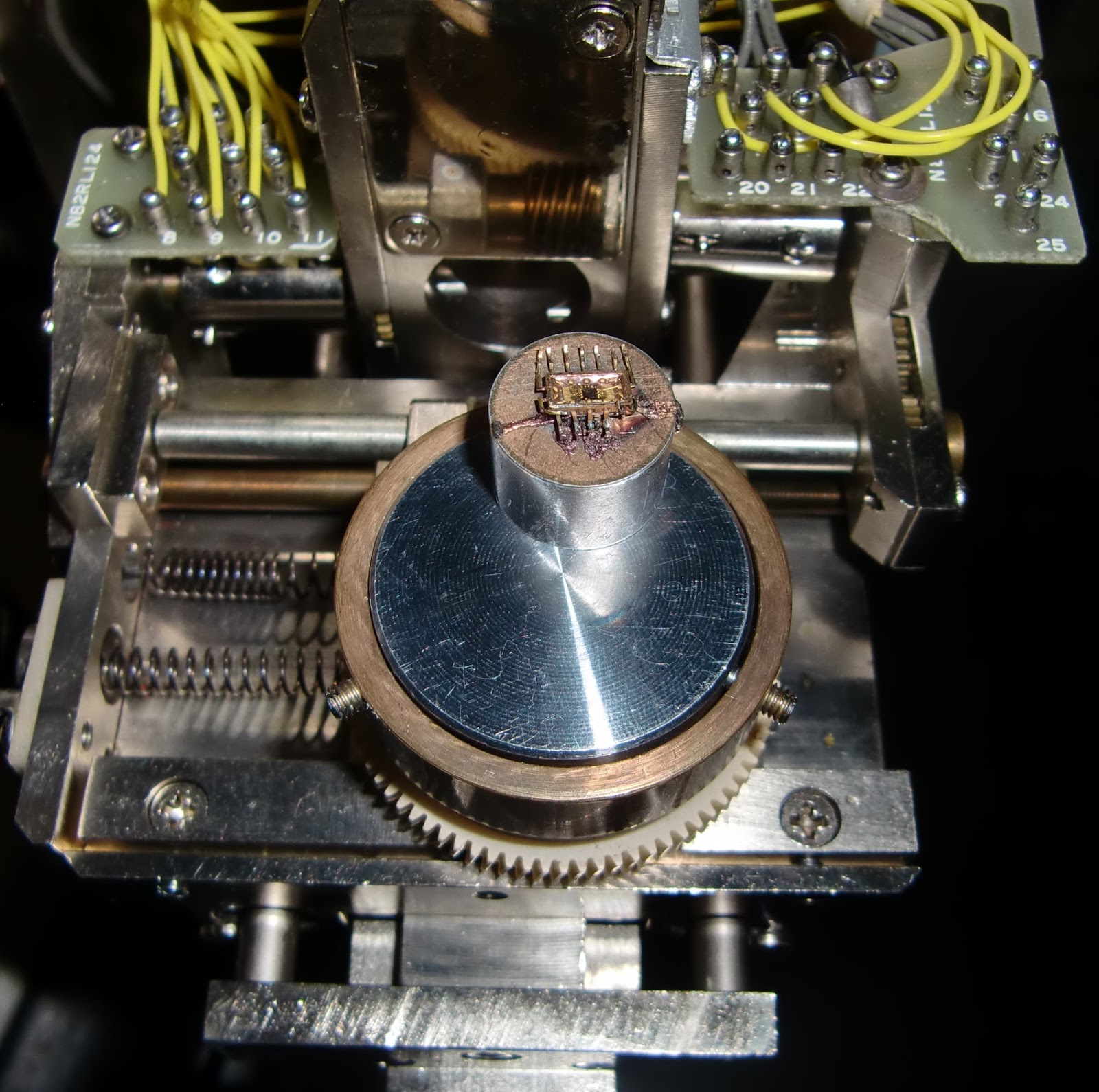 It has numerous electrical feedthroughs.  I haven't come up with a use for them yet but it does leave a lot of possibilities open. 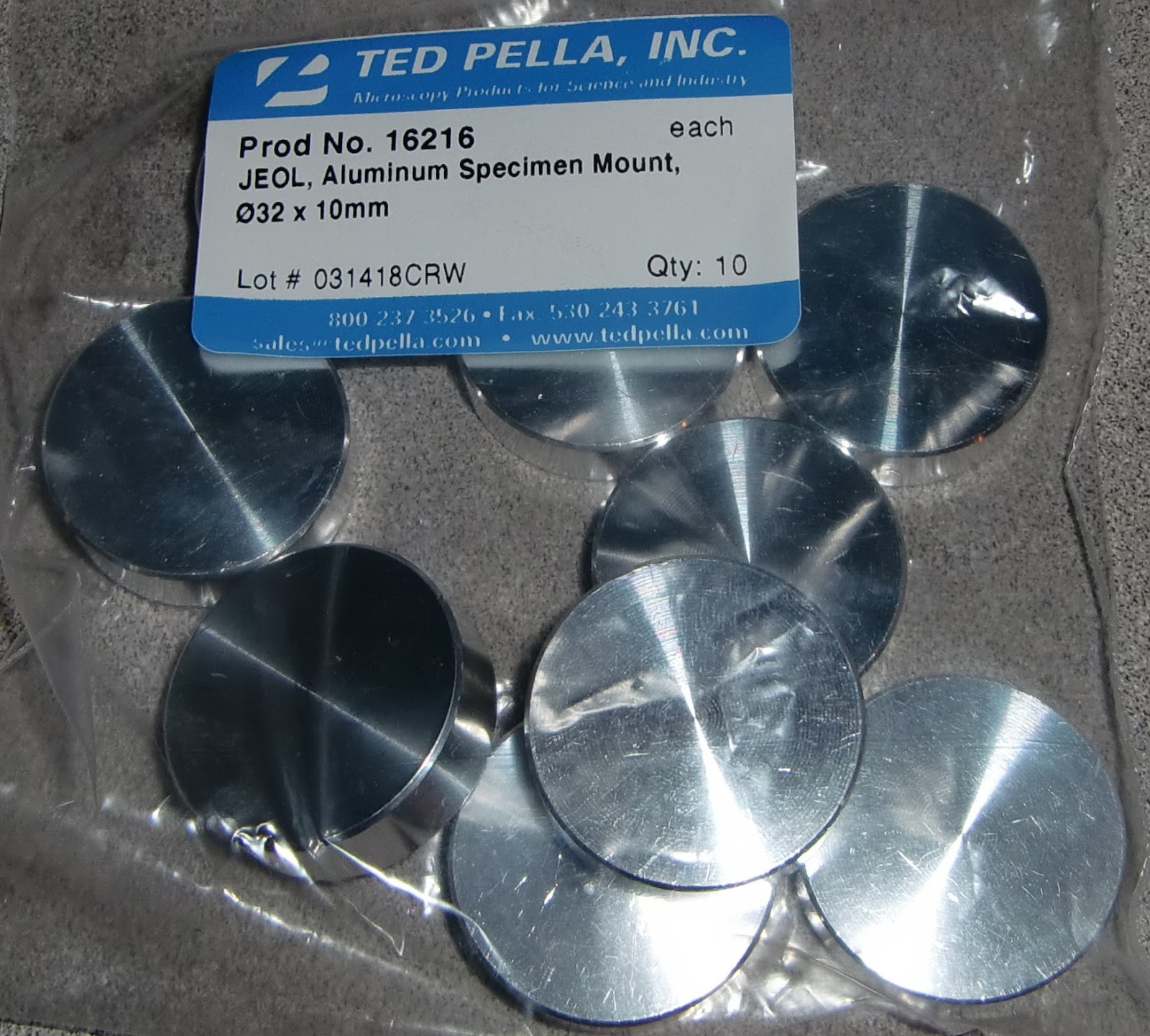 The specimen mount on the stage image previously shown has a smaller one placed on top of it that came with the SEM.  It did not fit and so was packaged with aluminum foil: 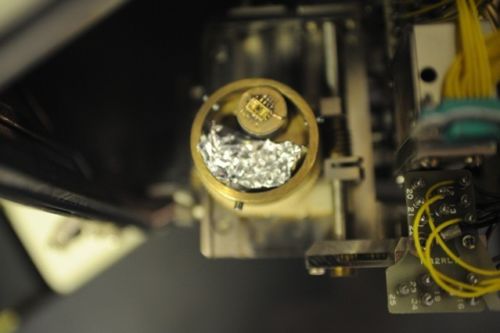 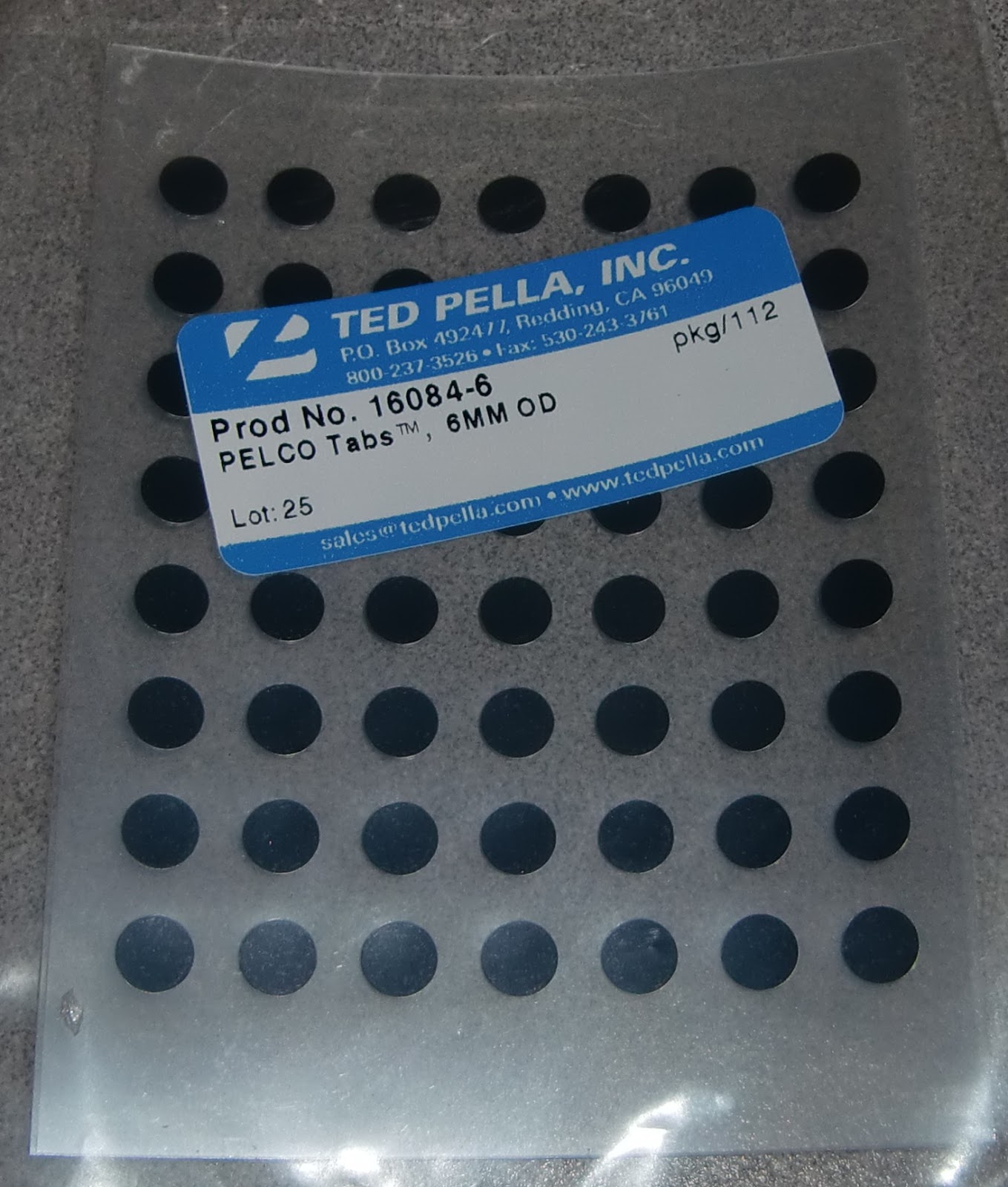 The specimen holders are quite large...should be able to hold several specimens per holder.

Next steps forward are to:
One oddity is that it requires single phase 100VAC.  I should be able to supply this with a variac without problem.

Longer term goals:
But those only matter if I can get it working at all.  Fortunately, someone else rebuilt an identical unit which should also help.
Posted by John McMaster at 2:11 AM No comments:

Not quite dead yet

Almost reached the one year mark without posting, but haven't been idle.  Since my last post I've:
I'll go through backlog and see what I can post updates on.  FWIW, I have continued to update Silicon Pr0n's wiki and archive areas.

Since my SEM shipped today, seems like a good place to start.  I've been looking for a SEM for a while as I find an increasing number of chips that I need sub-optical imaging on.  I even drove up to northern california for a weekend to check out a Cambridge Instruments Stereoscan 150u.  This is a pretty typical size for these beasts: 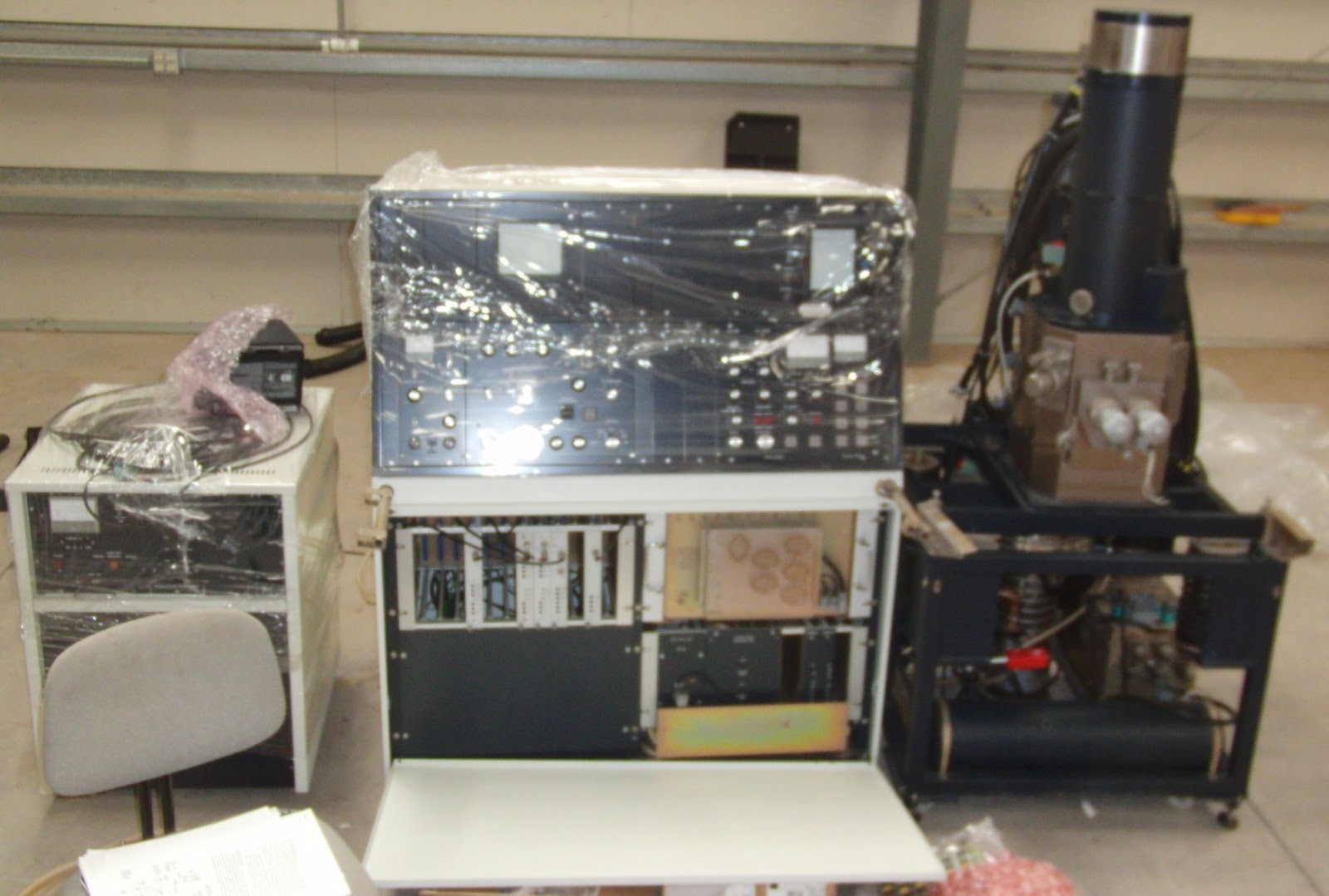 This was from Craigslist, but I was also looking at eBay and industrial auctions.
Many were available, but had onerous power requirements (three phase), were too large, or cost too much.   None of these were necessarily a problem but were going to be a big enough hassle that I didn't want to deal with it.

Noisebridge had a ISI TV Mini-SEM that didn't seem to work (although did at one time) and I enquired into getting it with the intention of fixing it up and using it.  Overview:

Ultimately someone else snagged it and its out of the picture.

Eventually I found an ISI Super IIIA on eBay essentially for its scrap price: 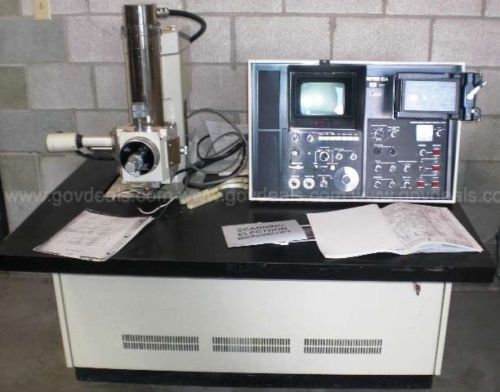 Made by the same manufacturer, it looks similar to the noisebridge unit.  It took about 4 months to pack it up and work out shipping but today it was loaded onto a truck and should arrive in a week! 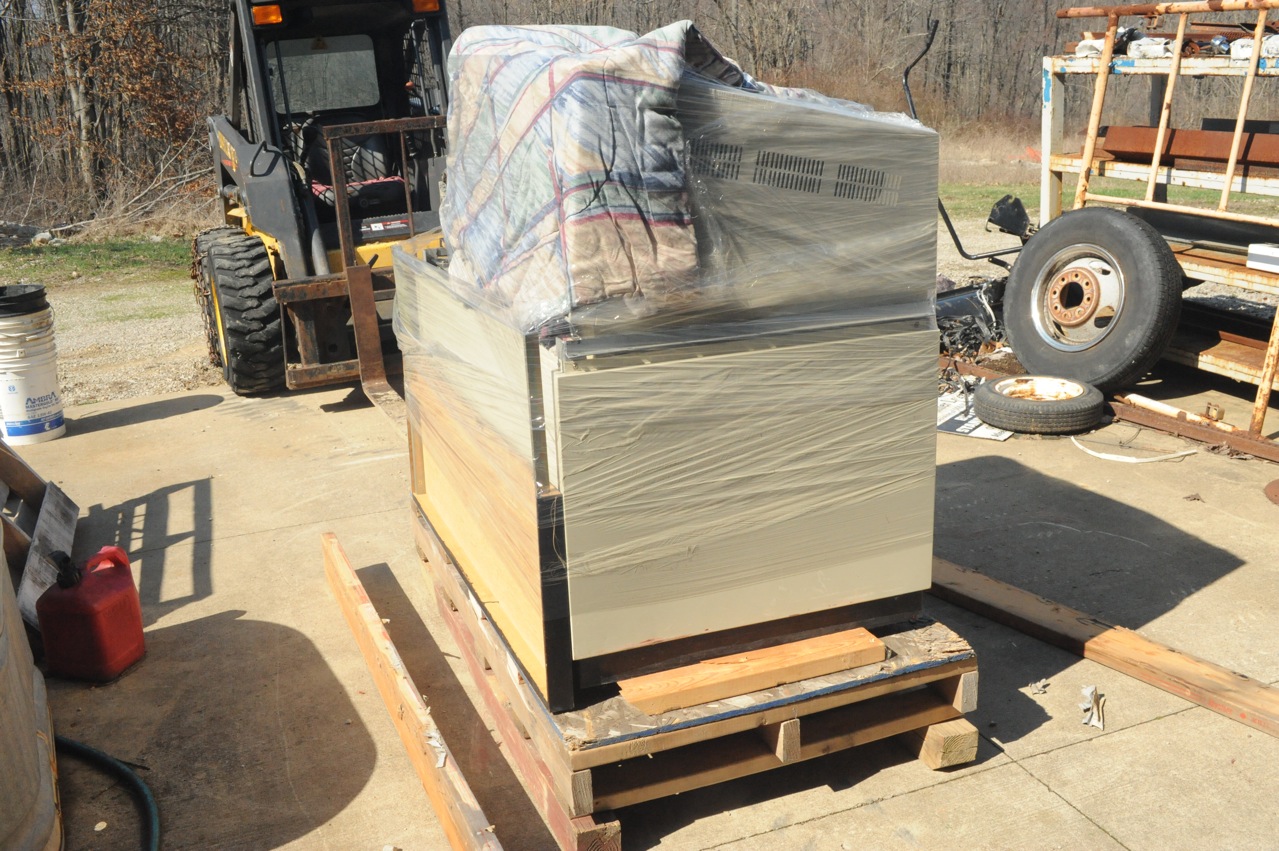 Its the same model SEM that someone else rebuilt.  This model was chosen because it was relatively low cost (about $1200: $312 purchase price + about $900 S/H) and reasonably compact.  It also runs on single phase power (unclear if 110 or 120).  To put its size in perspective, the first SEM's middle piece is larger than the entire setup above.  Granted, it was probably more powerful but this is good enough for now.  I'll post more pictures once it shows up and I start rebuilding it.

If you are in the SF Bay area and are interested in helping fix it up or using it, gimme a ring!
Posted by John McMaster at 9:02 PM No comments: