Some other minor equipment info.

Also someone did a nice writeup on doing backside analysis: Functional Integrated Circuit Analysis I have an SWIR rated objective I was hoping to play around with something similar but it turned out to be less trivial than I hoped to remove the IR filter from my lamphouse.  I could buy another (an Olympus LH-50A if someone has one ;) ) but I haven't found one at a price I like.  I could just suspend the bulb but its a pain to align like that.

Posted by John McMaster at 12:59 PM No comments:

As a sort of control I wanted to see if letting a chip in 70% does anything.  I'm not sure where these pictures went but the answer is no, not really.  I could still read the label on the 70% chip although the pins weren't visible anymore.

H2SO4 is dirt cheap for me to get where as nitric tends to be expensive to the point where I actually distill my RFNA / WFNA.  I was distilling RFNA before but using it sparingly since it took a bit of work.  I've since realized that I can make WFNA much easier as the vacuum distillation is quite quick.  In fact, I did an experiment on some old (for emphasis, it may have decayed making this an unfair comparison) RFNA vs some new WFNA on the same chip which I let sit for 90 minutes cold.  Our prisoner assistant: 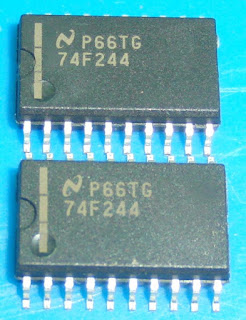 Each one was given 5 mL of acid and let sit for 90 minutes covered.  First look:

Close up of the WFNA chip:

which even has some undercut (peeling from drying?) where as the RFNA was solid.

It seems that the fresh WFNA did a lot of damage where as the RFNA only did a little damage.  However, much close to when I freshly made the RFNA, I stored some in a polypropylene vial and it was severely eaten overnight where as I haven't noticed any degradation storing WFNA in the same vials.  Note that storing strong oxidizing mixtures in plastic vials isn't probably a good idea but it makes ultrasonically cleaning chips easier with what I have on hand.  I've been meaning to order some small PFA tubes but haven't gotten around to it.  Anyway, I wouldn't say that this is conclusive but my feeling is that at it is likely demonstrating that nitric decomposes significantly over time and should be used fresh.  Next time I make a batch of acid I'll make a batch of each and do a fresh comparison.


The next thing I was curious about was that if H2SO4 could be used to enhance nitric acid cold.  I've noticed that nitric rapidly decreases in usefulness on epoxy with decreasing concentration.  My hope is that if I could dehydrate it with something it could prolong its life.  I've tried soaking some chips in cold H2SO4 and haven't seen any effects.  I've read that concentrated H2SO4 should cause the epoxy to swell but for one reason or another I haven't observed that (mines 98%, maybe not dry enough?). 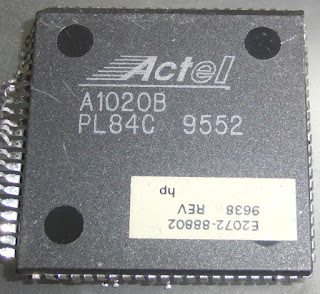 2 Actel A1020B FPGAs selected for no particular reason other than that I had two of them.  I stripped off the outside pins from both before adding acid.  I added 3 mL WFNA in a PTFE beaker (an eBay seller had a bunch 3 for $5 so I bought a bunch of them) with a watchglass on top to one and 3 mL WFNA + 3 mL 98% H2SO4 to a PTFE beaker with a watchglass on top to the other.  This volume let both chips be completely covered at least at the start.  5 mL may have been a little better  I let them sit overnight, maybe 15 hours total.

The WFNA initially etched very quickly as the solution turned dark after just a few minutes. The next day there was a lot of NO2 trapped: 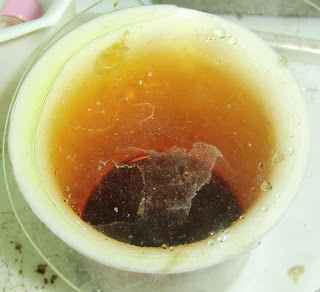 Letting it air out: 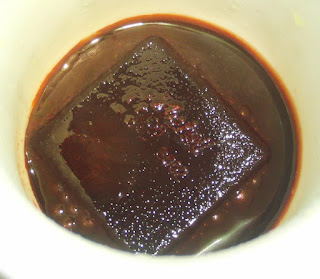 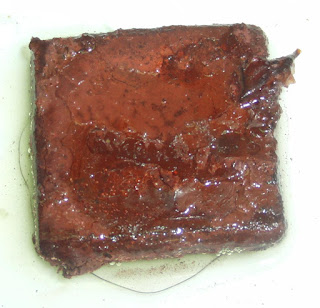 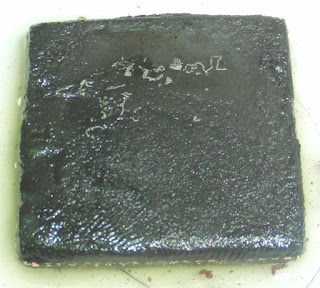 The chip is only barely etched, maybe about 10% of the height (I didn't weigh them, maybe should have).  The Actel logo is even still a little visible above.  My first thought is that it may have spent most of its acid on the pins but there is exposed copper (after cleaning) at about the same level as the plastic package.

This etched much slower than the WFNA.  In the few minutes after adding the chip where as the WFNA had turned very dark this was only tinted.  Letting it sit overnight had some NO2 but not nearly as much as the WFNA: 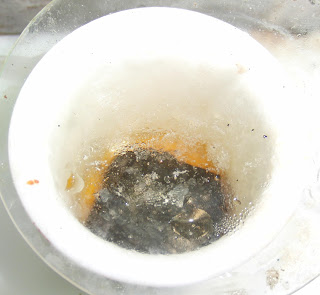 Draining the acid off: 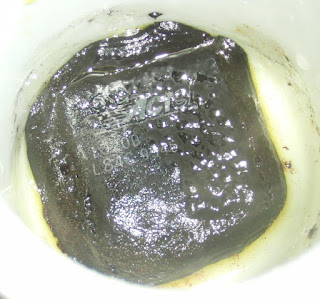 A bit odd shaped.  The other side makes it look sorta like a rock: 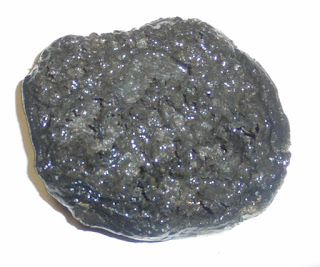 Maybe this is what the H2SO4 swelling is suppose to look like.  It seems odd though that I wasn't able to observe it until diluting with another acid.  After cleaning it looked like this: 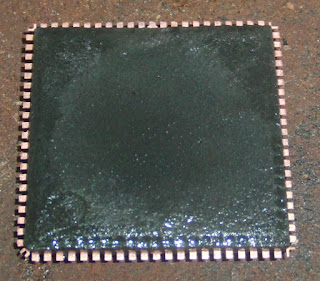 I'd say about 40% removal of the epoxy by height.

Here are the washed + ultrasonically cleaned chips side by side (WFNA left, WFNA + H2SO4 right):

The WFNA chip turned red again but the other one didn't.  Presumably this is from acid residue and it would stay dark if I washed it more thoroughly.  Overall the WFNA + H2SO4 did pretty good.  It was slower but did well overall.  It had to be cleaned to figure out how far it actually etched (you can still read the Actel logo on it above!).  My guess is that the main reason it did better is because it didn't have to eat through the copper.  Failure analysis books recommend 10% H2SO4 + 90 % RFNA to passivate.  I'd have to do such a comparison to figure out if the excess H2SO4 did anything or if it simply helped by passivating the copper.  However, based on the swelling which I've never seen before, I'm going to guess that it had other beneficial effects.

The only thing that I was a bit hesitant about is that this is a very strong nitrating mixture.  MSDS say that nitric is incompatible with alcohols and acetone.  My experience has been that alcohols should be strongly avoided and that acetone is only a problem at higher temperatures.  However, I tried to mix a drop of each and it reacted violently instantly cold.  So in conclusion: this may be a good way to prolong acid when you are patient but the mixture must be treated with care.