Sadly, I scrapped my 1994 Ford Taurus station wagon some months ago.  This is a tribute showing how I pimped my ride, its demise, and how I abused it before it finally got crushed. 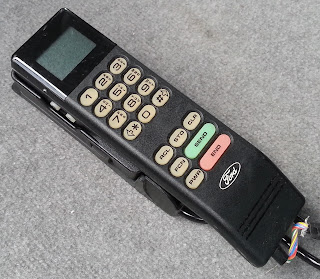 At its inception it was a pretty luxurious car that included stuff like a console mobile phone.  I looked into hooking it up and, unfortunately, analog cell service had been discontinued by 2013 when I got it.

My mom proudly displayed her country-western line dancing enthusiasm on her license plate cover.  However, she forgot to remove it when she gave me the car.  While I wouldn't put it on, I wasn't going to take it off.  People loved it and gave me lots of funny comments.

I came out to lunch a few months later and discovered my car now had some sweet flames!

But we can do much better. 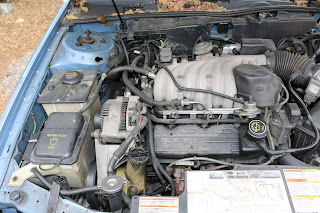 Laugh at the station wagon all you want, but it still sports a 3.0L V6.  Flames are good, but what a muscle car really needs... 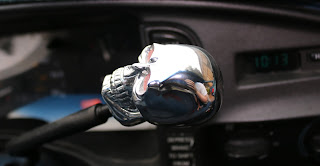 Is a skull shifter for its automatic transmission.  This actually was a bit of work to install as the original shifter was pressed on.  I still get Jeggs magazines to this day.  Trivia: I now use the skull to test satellite cameras. 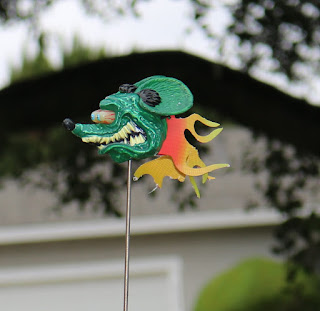 But more flames wouldn't hurt.  How about a flaming Rat Fink antenna ornament?  It was a close call between him and a flaming eyeball.  This was the most expensive upgrade I did, running me about $20. 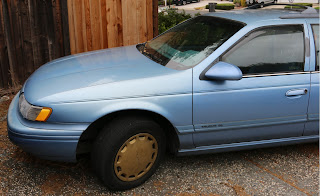 And wouldn't those hubcaps be better with some bling?  Nothing a little gold spray paint can't fix. 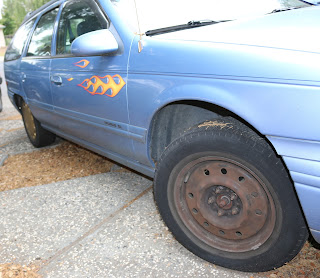 Of course, I'm only referring to the hub caps it still had.  Maybe I should have sprayed the rim gold? 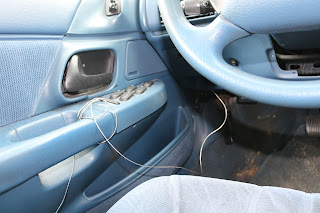 Not that the emergency brake release was doing much better.  Nothing a little bicycle wire couldn't fix. 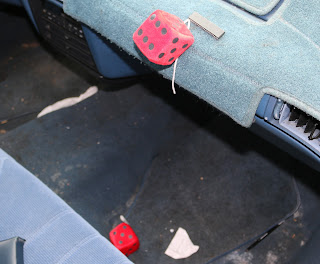 But the fuzzy dice didn't care.  I originally had them on the rear view mirror (per tradition) but found them too distracting.  I relocated them to the dashboard where they occasionally fell apart.

There were quite a few other upgrades I considered but never got to.  For example:

Its time to go

With over 200,000 miles, the car was worth maybe $800.  I was constantly working on it and, for example, recently replaced nearly the entire coolant system (hoses, radiator, water pump...). 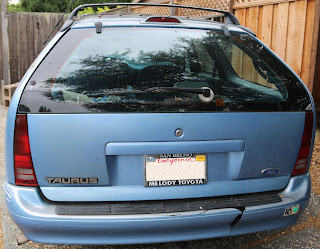 I got rear ended and their insurance gave me $1100 but didn't total the car!  The car is a bit of a tank and really only sustained minor damage to the rear bumper.

But not before I have some fun.  I looked over the gov program and more or less as long as the car barely worked I'd still get the money.

I went out to a large open area with a bud from work and started with some donuts.  Then I set the emergency brake and drove around for a bit.  I also slammed on the brakes as hard as I could (regular and e-brake).  Unfortunately the e-brake doesn't have much stopping power and so it only gently brought the car to a stop.

My favorite though was doing a burnout by revving the engine up in neutral and shifting it to drive.  The engine suddenly engaged and spun the tires so fast that smoke shot out.

There's a supermarket near me with a low dip into the parking lot.  The car has really low clearance so I have to go really slowly to avoid scraping it.  Of course, this time I went up there and floored it out of the parking lot, probably showering sparks with the impact.  I was somewhat surprised that the car still worked.

The steering wheel wiring harness had already fallen off and I really wanted to hotwire the car.  However, I wasn't confident I could do it without damaging the car so ultimately passed.

I really wanted to do NOS but everyone warned me that, with the engine's age, it would very likely destroy the engine on the first go.  Too bad as this would have been great for Wednesday Night Drags.

I also looked into demolition derby which actually wouldn't have been too much work (fuel cell + minimal cage).  I also wanted to shoot out some of the windows but didn't make time for it. 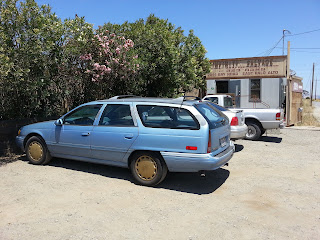 Ultimately though it found its way to the scrapper.  I wanted to drain the engine oil and see if it could make it there (10 miles) but my dad pleaded with me not to try it.

I seriously considered getting a hearse to replace it ("Last Ride" style) but ultimately decided on a 2006 RAV4.  By a hilarious twist of fate, it also had a dance themed license plate cover that was even stronger than the Taurus' (that my mom had also taken back by this point).

I still dream about getting a rat rod or a tank.  I actually found a really good local deal on a Warthog APC but unfortunately don't have a place to put one. Along with the SBX-1 and Sea Shadow (RIP) of course.